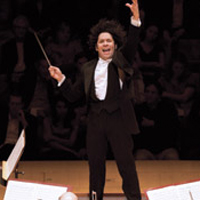 You had me at Gershwin. The elaborate L.A. Phil gala that took place immediately afterward was just a bonus—a bonus draped in blue fabric with a vintage twist. Tuesday night was the annual L.A. Philharmonic gala, which corresponds with the opening night concert for the Disney Hall’s 2011-12 season. The music of George Gershwin was the inspiration behind two hours of jazz-infused classical, featuring Herbie Hancock as piano soloist. Gustavo Dudamel was in particularly good form this evening, despite having just come off a nine-hour flight from Europe and suffering from severe jet-lag. The opener, Gershwin’s “Cuban Overture,” was right in the Venezuelan maestro’s wheelhouse, with Latin rhythms and lively percussion. Dudamel joked about having a sip of mojito off stage to get in the mood. Whatever he did, it worked. Next came an “American in Paris,” one of Gershwin’s most famous pieces, and a chance for the audience to swing right along with the orchestra. The middle of the two-hour performance was occupied by Hancock’s loose improvisations of Gershwin, which, from talking to folks afterward, were polarizing. Some felt he had the audience dangling on a string, striving to find the familiar hooks in his quiet cascade of notes. Others felt he diminished some of Gershwin’s magic by straying so far from the composer’s melodies. Either way, it was the one part of the performance on which everyone seemed to have an opinion.

The crowd-pleaser was the grand finale, “Rhapsody in Blue”—or, according to a man sitting next to me, “the American Airlines song.” It’s a masterpiece in its own right, and while I’m not sure Dudamel did much to elevate it, he respected it, and successfully captured the work’s turbulent rush. Hancock’s playfulness continued here, where he starred on piano. For the most part, he stuck to the script, only toying with the audience—and the conductor—with some creative pauses. It added a sense of humor and personality to the dramatic piece.

When the show was over, the well-heeled crowd paraded down to an enormous tent cloaked in blue where they were greeted by tables holding vintage-looking matchbooks and candy cigarettes. The meal, catered by Patina, carried on the retro theme with a play on a crab Louie salad in a halved avocado, beef Wellington “deconstructed,” and adorable individual baked Alaskas. (Unfortunately, the flambé took place behind the scenes.) Starting out on stage were live singers crooning 1940s and 50s standards while bedazzled, Ziegfeld-style dancers entertained on the dance floor. Our only real disappointment was that when the meal was over, the band switched to wedding mode and began covering the playlist from every reception you’ve attended since 1985. The crowd seemed to like it, but I was in vintage formalwear and, gosh darnit, I wanted my Dean Martin. The champagne flowed while black and white versions of Ava Gardner and Clark Gable looked on from their picture frames. Of the evening, I think they would have approved.

Best celebrity sightings: Quincy Jones, Kareem Abdul Jabar (how’d you like to sit behind him?), and the Captain himself, William Shatner.