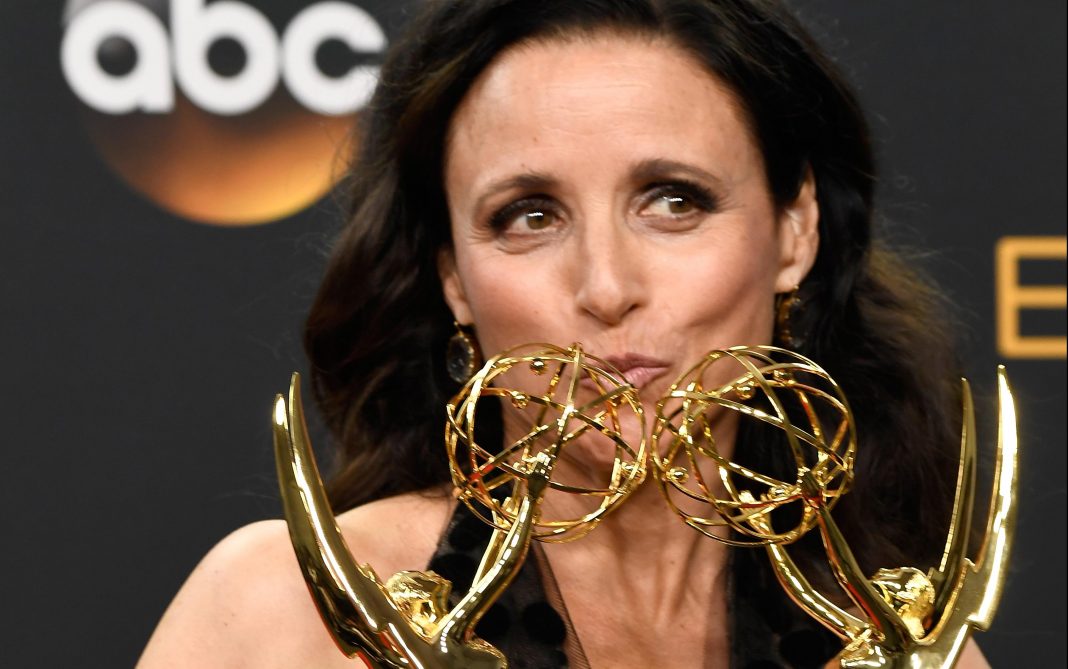 However, this is still an award show, and as such, it is our duty to bring to you a smattering of our psychotically specific observations surrounding the four-hour broadcast. Let’s begin, shall we?

Brooches are one of those iconic fashion items that we all want to pull off, only none of us are the Dowager Countess Violet Crawley. And so we shy away from them in fear—how do you wear one? What would people think? But tonight, Louie Anderson set out to allay all of our trepidation for the trend, which has been showing up at the fashion shows of designers like Versace and Michael Kors. With a single fashion-forward sashay down the red carpet, he took the first step so that we could all make the giant leap.

Eyebrows are like shoes: they lull us into a false sense of security. But just as everyone—yes, everyone—will notice when you wear tennis shoes with nylons, so too will they notice arches that are growing on your face like unchecked ivy. Paulson’s dark, strong, well-shaped brows are as much a part of her outfit as her plunging neckline and strategically styled pixie cut; they instantly aid in the creation of an iconic look, just as Gwyneth Paltrow’s bold brows are the one thing we all remember about her W cover shoot from September 2007.

It’s hard to think outside of the box when it comes to “his and hers” items, with the majority of us limiting the scope of coupley purchases to things like bathroom sinks and unforgivable engagement mugs. Leave it to Travolta and Preston, who have been married for 25 years, to give us a new set of relationship goals: his and hers dye jobs.

The art world only has a handful of true geniuses: Michelangelo. Da Vinci. Rembrandt. Siegl. Oh, you haven’t heard of that last one? Perhaps you’re more familiar with her masterpeice, aka Kristen Bell’s face. The makeup artist was the one behind Bell’s dewey, moisture-kissed cheekbones, which were almost enough to distract us from her dress (almost).

On a day during which Los Angeles felt like the surface of the sun, this apple, surely one from a local orchard, served its ultimate purpose: as a harbinger of fall. You didn’t need an HDTV to see juice dripping down Damon’s chin or hear the crunch of  flesh reverberating off the halls of the Microsoft Theater. Was it an Idared? Because it looks suspiciously like an Idared. Or perhaps it was a Red Delicious, only any apple aficionado knows that Red Delicious apples are out of season until late September. Is it a Honeycrisp? It is, isn’t it. If yes, someone tell us where it came from, because Trader Joe’s has been out of them for weeks.

Many women on the red carpet mentioned that they were “glowing,” which is code for dripping sweat. Cox, on the other hand, was actually glowing—her clavicles were dusted with an iridescent powder that matched the shade on her eyelids. So unless you leave your next SoulCycle class looking like the above photo, you are forever forbidden from referring to your own perspiration as “glow” or any such synonym.

Isn’t it precious when a young star isn’t yet jaded by the cruel ways of the world? Malek adorably referenced his shock and awe at winning by quoting his own sociopathic Mr. Robot character (which only makes it slightly less adorable): “Please tell me you’re seeing this, too.” We are, kid.

Louis-Dreyfus is like the one friend we all have who is both a shimmering wit and also so put together that it borders on annoying (only really we’re just jealous of that friend because they always look better in our Instagram photos, and they come up with smarter captions). Her sharp tongue is as consistent as her staggering and commanding presence, and that is a feat. As Bey would say:

That segment of the Emmys where accountants come out and talk about whatever it is that they talk about (Spreadsheets? The lack of true character development in the Independence Day sequel? Could be anything) is always an eye-glazer. Jones miraculously turned a dry-as-dust segment into something watchable by providing a moment of self-deprecating and honest humor through a reference to the hack of her Twitter account. Your hand may have hovered over the mute button, but you didn’t press it, and that’s a win for Ernst and Young.