Home Uncategorized These 3 Books Will Teach You 5 Things You Didn’t Know About... 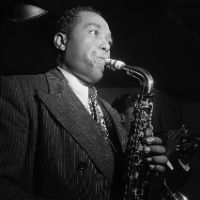 Nearly 60 years after his untimely death at age 34 (the same age as Adam Levine), jazz saxophonist Charles “Yardbird” Parker is the subject of three new music biographies—make that two new bios and one reissue. In the 1940s, Parker became a legend by stunning squares and hipsters alike with his improvisational abilities. His one-the-spot interpretations freed jazz from the monoliths of Swing and Pop. In short, Parker made jazz dangerous again, and each biography makes cogent arguments for hearing this tormented but ebullient genius’s music with new ears.

“Once I thought of him as a figure before my time,” critic Gary Giddins writes in his introduction to the 2013 edition of Celebrating Bird: The Triumph of Charlie Parker, originally released in 1987. “Now I am fascinated by the fact that we haven’t yet even reached his centenary…In short, Parker is our contemporary.” Giddins, who once wrote a jazz column for the Village Voice called “Weather Bird,” describes Celebrating Bird as an “extended biographical critical essay” on Parker’s brief life modeled on Jean-Paul Sartre’s study of the Italian painter Tintoretto.

The most anticipated of the new books on Parker is Stanley Crouch’s soulful, poetic and often graphic Kansas City Lightning: The Rise and Times of Charlie Parker. Covering Parker’s early years from his birth in Kansas City in 1920 to his first trip to New York at age 19, it reads like the jazz version of Batman Begins, with Crouch detailing the raw materials of culture, class, and race that forged Parker’s musical identity. (Thirty years in the making, Crouch’s project is also shaping up to be a multi-tome epic along the lines of Peter Guralnik’s biography of Elvis Presley or Robert Caro’s study of Lyndon Johnson.)

Chuck Haddix’s more conventional and workmanlike Bird: The Life and Music of Charlie Parker is biography by the numbers. A studiously researched overview of the man, it underscores how Parker’s life was as concise as his influence is infinite.

Taken together these three books contain fascinating anecdotal evidence of Parker not as a frozen visage that adorns photos in jazz clubs and t-shirts on Melrose but as a man of unfathomable complexity and insatiable appetites. Here’s a taste:

1. HE COULD—AND DID—SLEEP ANYWHERE
Parker’s frequently itinerant life—for a time he rode the rails as a hobo and ate his breakfasts courtesy of the Salvation Army—his endemically restless nature, relentless pursuit of after-hours jam sessions, and taste for drugs (especially heroin and Benzedrine, a precursor to methamphetamine that allowed him to stay awake for days) meant that home was anywhere he laid his hat. He slept with his horn on park benches, in phone booths, on subway cars, in railroad boxcars, in taxis, in practice spaces, and in friends’ apartments still wearing his rumpled clothes and dirty shoes. When he nodded off on bandstands while on heroin, his bandmates simply thought he was tired from his after-hours carousing. When he turned up in New York in the winter of ’39, he’d been wearing the same shoes for so long that his legs and feet were swollen. During his unlucky stint in California, he slept on a cot in a friend’s unheated garage. At a Kansas City club called Tootie’s Mayfair, Parker slept on a tabletop for three nights in a row.

2. HE WAS NO FASHION MAVEN
Despite the image of jazz musicians in snazzy suits and hipster porkpies (see Spike Lee’s Mo’ Better Blues), Parker’s sense of fashion reflected his lack of concern for anything but playing his horn. If he played in a big band that required uniforms, the older musicians would commandeer his band jacket to keep it from being rumpled or destroyed. When he showed up in Chicago, he was wearing, according to Crouch, “some old clothes… His pants were far too big, held up by a long piece of cloth; worn workman’s shoes protected his feet; a threadbare suitcoat covered a rumpled shirt. Over it all he wore a ragged topcoat, buttoned all the way up.” A photograph of Parker playing in Los Angeles in 1946 shows him looking like Fred Mertz from I Love Lucy wearing giant striped pants held high by suspenders and a nubby checkered-plaid shirt. Later in his career, Parker favored wearing a white suit during his performances, but it was soon besmirched by stains and wrinkles from sleeping on people’s couches.

3. HE AND DIZZY GILLESPIE WERE NOT BROS
Although the popular conception of bebop’s early days centers on the bromance between Parker and trumpeter Dizzy Gillespie, their association was much more complicated and short-lived. Their professional accomplishments aside, the two men had wildly divergent personalities and lifestyles, and they did not hang in the same social circles. Gillespie was enamored of clowning and mugging onstage, which Parker found embarrassing. It was Gillespie who coined the word “bebop”—a word Parker openly scorned. (“It’s just music,” he once told an interviewer, “It’s trying to play clean and looking for the pretty notes.”) While Gillespie cultivated the beret-wearing, goatee-sporting, finger-snapping archetype that quickly hardened into cliché, Parker provided the soundtrack and the junkie chic that was imitated by many musicians in his wake, much to his dismay. Gillespie was energized by the younger man’s talent but frequently confounded by his habits and chronic irresponsibility. Their storied 1945 West Coast debut at Billy Berg’s in Hollywood was plagued by disaster: Parker, in search of a heroin fix, vanished into the city and Gillespie gave his plane ticket to another musician. “The trip to Los Angeles,” Haddix writes, “ended one of the most creative musical partnerships in jazz.”

4. HE MAY HAVE PREDICTED SAMPLING
In the spirit of composers like Charles Ives and musicians like Art Tatum, who “quoted” other songs within their performances, Parker may have been one of the first to articulate the future of this practice, partly because he was enamored of modern technology. During his solos, Giddins writes, Parker “imitated sounds echoing in from the streets—engines, backfiring tires, auto horns—and worked them into musical phrases… [He] took it another step: he quoted melodies purely for their lyrical relevance to the moment. He might nod to a woman in blue with a snippet of ‘Alice Blue Green’ or to a woman in red with ‘The Lady in Red’ or acknowledge a woman going to the ladies room with “I Know Where Your Going.” Many of his audiophile fans would show up to his shows with portable tape recorders or disc cutters to record only his solos, turning off their apparatus once the other musicians began playing. These legions of amateur bootleggers must have affected him. In 1952, he told a fellow musician, “Someday in the future, they’ll be able to put your music in a can. Then, whenever, they want to, they’ll do it just like they were using a spoon to take out as much of you, or as little of you, as they need. After they have done whatever they want to do with you, with your sound, they put you back. Your future, my dear fellow, is in a can.”

5. GENIUS DID NOT COME TO HIM EASILY
His talent didn’t flow full force since childhood like it did with Mozart; it was forged and dredged to the surface after years of scuffling and public humiliation. For a time, he couldn’t figure out what instrument he wanted to play, starting with the trumpet and even detouring towards the Sousaphone. (How different would music history have been if he had chosen the latter?) Even as Kansas City bandleader Oliver Todd fired Parker for his “fumbling performance” on the bandstand, he remained “startled by the contempt these older musicians showed the young saxophonist.” He was laughed off the bandstand of Jimmy Keith’s orchestra when he botched the standard “Body and Soul.” Other musicians scorned his raggedy silver Conn sax held together with rubber bands, tinfoil and cellophane. The legendary summer night in 1936 at Kansas City’s Reno Club with the Count Basie Barons of Rhythm, where he was booted offstage by drummer Jo Jones—dramatized in Bird, Clint Eastwood’s 1988 biopic of Parker—he was so nervous that he played ahead of the rest of the band. The slights made him practice with frightening obsessiveness. After a summer playing juke joints in the Ozarks, Parker took his horn down to the Tap Room where Oliver Todd was leading a band. “Before the thing was over,” Todd recounted, “all the guys that had rejected him were sitting down with their mouths wide open.” He didn’t win everybody over. “To [bandleader Harlan] Leonard’s point of view, Charlie’s gift was misplaced,” writes Crouch. “It should have gone to a much better man, not this knucklehead mama’s boy, who seemed to delight in the way his fellow band members sided with him against the leader.”