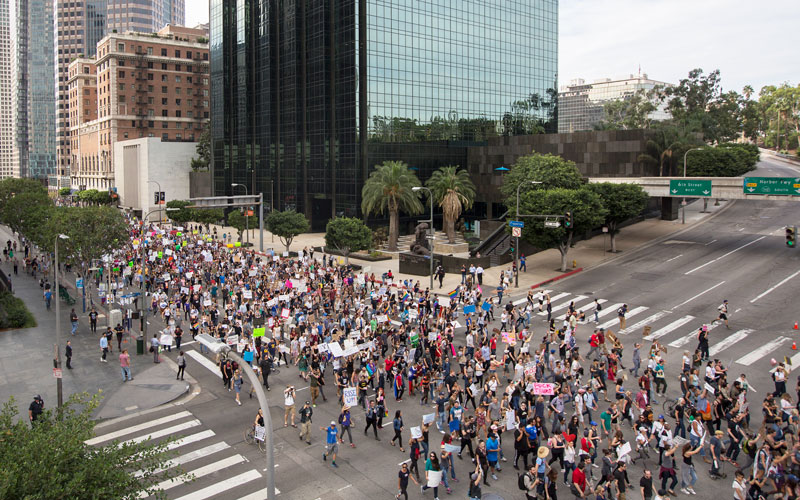 Might as well invest in that new pair of sneakers. The national farce that is Trump’s plan of action shows no sign of stopping, and neither do the protests. This Saturday, April 15—tax day—is the Trump Tax Returns March.

RELATED: There’s Going to Be an Anti-Trump Science March in L.A. for Anyone Who Believes in Facts

Donald Trump STILL has not released his tax returns, which is concerning since the information therein would reveal a lot about our new president. Kellyanne Conway and Trump himself have repeatedly claimed that the American people don’t care about the tax returns. That’s objectively false. (FYI, the petition on the White House website demanding Trump release his tax returns broke records earlier this year.)

So, as the past few months have demonstrated, the most visible way to assert that we do in fact care about the shady stuff Trump is doing, is to gather en masse an yell about it in public.

The march is planned for at least 63 U.S. cities, including Los Angeles, where it will begin in Pershing Square downtown at 11 a.m. and progress to city hall. The lineup of speakers includes precious, precious Ted Lieu. There will be a giant inflatable Donald Trump chicken, because, you know, he’s a chicken for not showing us his tax returns. Currently the local march is at 22,000 RSVPS, with 50,000 “interested”—which, you might notice, is more than any other city. Sorry, we get a little competitive.

Thomas Harlander is junior web producer at Los Angeles magazine. You can follow him on Twitter and Instagram. He recently wrote: Great News! In Multiverse Theory, There Are Infinite Worlds Where Donald Trump Did Not Win the Election