Home Uncategorized There’s a Replica of the Otherworldly Bedroom from 2001: A Space Odyssey... 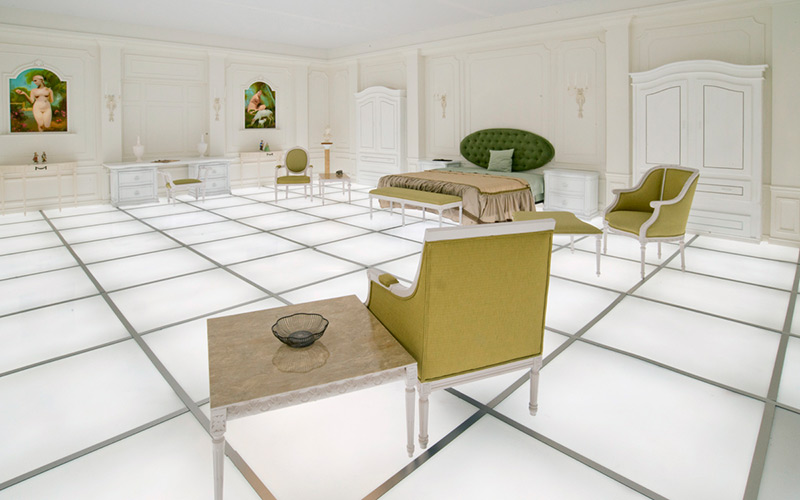 On March 11, Simon Birch quietly opened the 14th Factory in a three-acre Lincoln Heights warehouse complex, just up the street from the abandoned Lincoln Heights Jail. It’s an ambitious artistic undertaking and, at $3 million, a costly one: Birch, a Hong Kong-based British artist, has transformed the space into a series of micro-exhibitions meant to take viewers on a “hero’s journey,” a reference to Joseph Campbell’s Monomyth. The goal is that we’ll all emerge from the multimedia installation—whose vague themes include transformation, East versus West, and the collapse of empires—victorious in one way or another.

The various large-scale immersions feature projections, paintings, sculptures, and, in one instance, a lush patch of real grass. But the most Instagram-worthy is a bedroom—one that happens to be an exact replica of the one in Stanley Kubrick’s Oscar-winning film 2001: A Space Odyssey.

Here’s why this is so dope. Kubrick was notoriously cagey with his work. Once he finished a film, most of the elements that went into creating it (sets, costumes, props, storyboards, etc.) were promptly destroyed. Birch dreamt of recreating the room for the exhibition, but he had no set designs off of which to work; According to the South China Morning Post, Birch showed the project’s architect, a guy named Paul Kember, a series of stills from the film hoping he’d be able to recreate it. Then Paul goes, and I’m paraphrasing here, “Oh, Si, didn’t I tell you? My uncle and great-uncle—you know, Tony and John?—were draughtsman on that movie, and they literally—literally!—worked on that exact room! Isn’t that bonkers?!” Classic Paul, always burying the lede.

Thanks to Uncle Tony and Uncle John, Kember was able to recreate the space to a tee. Check it out at the 14th Factory now through April 30. The L.A. Phil Is Bringing Stanley Kubrick’s Affinity for Orchestral Music to Life

The 12 Best Things to Do in L.A. in November