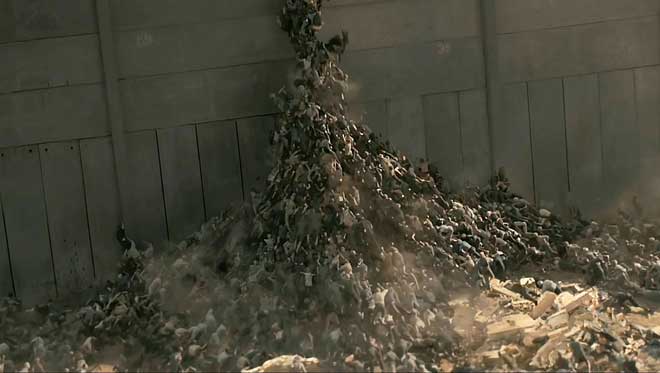 The undead were generally depicted as shambling, grunting creatures dragging around their deceased carcasses at a pace that a toddler on a tricycle could outrun. Sure, they were relentless and they had a bottomless stomach for brains, but the “zombie onslaught” never seemed like the kind of problem that a crapload of ammo and some halfway decent marksmanship couldn’t solve. Sitting on the porch picking off zombies through the scope of a high-powered rifle? That’s what video game-playing teenagers are for; they’ve been training for years!

Then came the “rage zombies. You can thank (or blame) Danny Boyle. In his 2002 film 28 Days Later, bike messenger Cillian Murphy wakes up from a coma to discover that civilization has been destroyed by a “rage virus.” Ragtag survivors roam the country trying to avoid the Infected, who are ultra violent, psychotic, and fast. Very, very fast. Information, communication, relationships. Everything (except checking in at the airport) is faster these days. Why wouldn’t the zombies also be faster?

In the decade since then, rage zombies—from Walking Dead and Zombieland to Shaun of the Dead, Dawn of the Dead, and pretty much anything else that ends in “of the dead”—haven’t merely become the norm, they’ve made the classic, slow-moving zombie as archaic as a landline. Now comes World War Z.

Based on a 2006 novel by Max Brooks (son of Mel), the movie features the angriest, most aggressive zombies in cinema history. If you’ve seen the trailer, you’ve seen the film’s best shot: A pileup of zombies crushing each other to climb over a wall that’s hundreds (thousands?) of feet high. The unhuman ladder is terrifying and beautiful, a visual metaphor for thin the veneer of civilization and how fast it can crumble—which is, perhaps, the most enduring and liberating pleasure of the zombie genre.