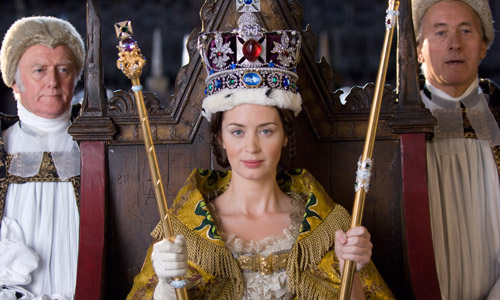 For all those who’ve gotten a bit Elizabethed out in the last few years, this flick features the other big deal royal and focuses on what is perhaps one of the most touching love stories of all time – that of Queen Victoria (Blunt) and Prince Albert (Rupert Friend). Producers even include royalty – well ex-royalty – in Sarah Ferguson, The Duchess of York and Hollywood royalty Martin Scorsese. Director is Jean-Marc Vallée.

Emily Blunt transforms herself as the sheltered princess with the overbearing mother The Duchess of Kent (Miranda Richardson) whose creep of an “advisor” Conroy (played menacingly by Mark Strong) both bat her around like a pawn on a chessboard. This isn’t a story about history – this is a story about dysfunctional families and character. There is an oddly familiar feel to the scene in which Victoria’s uncle – King William (Jim Broadbent) stands up at dinner and delivers a tipsy, “I never liked you” speech to Victoria’s mother (some of which is actually historically accurate).

King William dies. Victoria ascends the throne of England, banishes ma and creepy Conroy, and here come the suitors (her cousin, Albert is among the throng) and advisors. She naively takes on a sole advisor in the Prime Minister – Lord Melbourne (Paul Bettany) that causes some political shenanigans. All the while keeping in touch with cousin Albert. Despite everyone’s maneuverings Victoria and Albert genuinely fall in love and he becomes her best advisor. Friend gives an impressive performance, subtle, almost in a minor key and it’s nice to finally see Blunt play the lead.

Go see it. If you can’t find anyone to go with you – I’ll see it again.

Blunt was nominated for a Golden Globe for the role this morning!