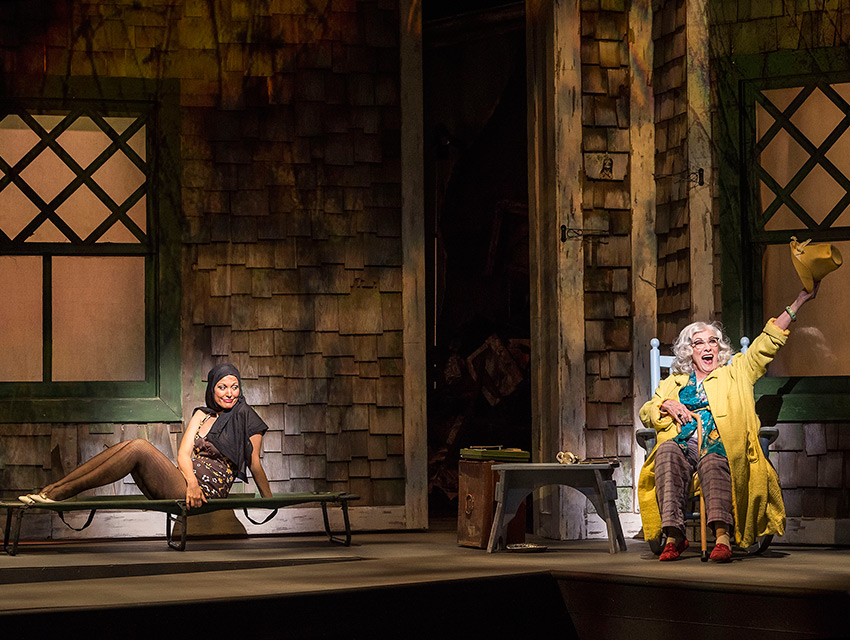 Of the 1975 documentary film by the Maysles Brothers that inspired the musical Grey Gardens, actress Rachel York says, “It is important for the audience to know that this was the purest form of reality television. There was a camera on them the whole time.”

The “them” she refers to are Edith Bouvier Beale and her similarly named daughter who went by “Little Edie.” They lived in an unmaintained East Hampton mansion overrun with cats, and though they were Jacqueline Kennedy Onassis’s aunt and cousin, they lived in total squalor. Naturally, the story is perfect fodder for a musical. York plays Edith in the first act and plays “Little Edie” in the second act, which takes place 32 years later. (Betty Buckley plays her mother in act two.) We spoke with York ahead of the show’s opening tonight at the Ahmanson Theatre:

What makes the dynamic between mother and daughter so compelling?
There was competition between Big and Little Edie. They would use the Maysles as their intermediaries. Sometimes they would perform—they felt they had to for the camera. They were doing a movie. They weren’t that familiar with documentaries. They thought, “We’re the stars of the movie,” which they were. You see a little of their nutty behavior. It’s all genuine.

This production started at Bay Street Theatre in Sag Harbor, not far from the real house where Big and Little Edie lived. Did you get a chance to visit Grey Gardens?
We were there for a little cocktail hour on the porch. We sang a couple songs and did some lines from the show. It was really, really eerie and cool to be saying those lines in the actual place where it happened.

You and Betty Buckley seemed baffled as to why such a wealthy family wouldn’t take better care of these women. Have you come to any conclusions?
I don’t think the sons came and visited enough or helped out enough. They claimed they didn’t have enough money to support them. I have trouble understanding—if your mother is living like that, you find a way to get a new mattress. You get a cleaning lady.

In act two, Little Edie has a song called “The Revolutionary Costume for Today.” Can you talk about her fashion sensibilities?
[They are] a conglomeration of everything she is and her situation. She was losing her hair and she didn’t have any wigs at her disposal—they were going to be filming her as an actress, so she started wearing these scarves on her head to cover her thin white hair. She was using whatever she had in the closet to become a stylish actress in the film.

Why has this story resonated through so many iterations?
With reality television being so prevalent, you can see how this was one of the first reality shows there was. There is just this fascination: How in the world did these two women end up in this circumstance? They were brought up to be socialites. How could they live like this? How could they stand it? The great thing about the musical is I find the music really enhances the poetry of the documentary.

They lived with 52 cats. What do you think life with that many cats would be like?
I will tell you the difference between me and Little Edie is I’m a little fastidious. If I had no money, I would still find a way to keep it clean.