Home Music The Women Behind Cumbiatón L.A. Turned a Dance Night Into a Safe... 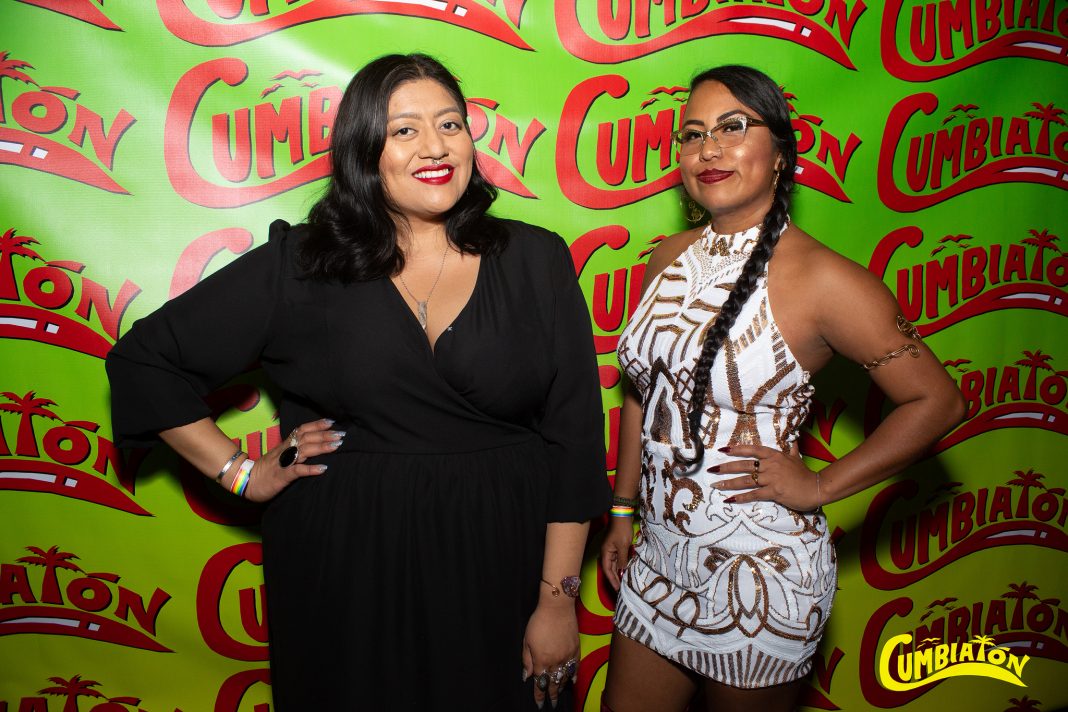 It’s the Friday before Christmas and the Echoplex is at capacity with over 800 people dancing with their partners, friends, and family (there’s for sure a mom or two on the dance floor too). The energy at Cumbiáton Los Angeles is as warm and inviting as it is lively and pulsating with energy. Behind the DJ booth is Boyle Heights-bred DJ Sizzle Fantastic, aka Zacil Pech, playing the sounds of childhood–everything from cumbia, merengue, and salsa to rock en español and banda–as partygoers forget, if only for a couple hours, that the world’s still turning outside the music venue.

“Yes, we have a lot stacked against us—we have a whole country, we have a whole administration that sees us as targets, that sees us as the enemies, but we’re not shriveling up,” says Pech. “You may see us as that, but we see each other as greater beings that despite all of it, we’re out here thriving. We’re still out here living life, singing, dancing, and providing spaces where our communities can be themselves.”

Co-founded by Pech and Norma Fajardo (who goes by Normz La Oaxaqueña) in May 2017, Cumbiáton is “an intergenerational cultural movement which utilizes music as a vessel to heal and uplift oppressed hood communities.” What began at Boyle Heights’ First Street Pool & Billiards has eventually branched out to bigger venues, and other cities like San Francisco, Seattle, and New York.

The two women met in 2013 and became fast friends working together for a labor rights organization that provides resources to undocumented and immigrant workers in the city. Their passion for immigrant and labor rights was what bonded them—and their love of cumbia, which they both grew up listening to, was the cherry on top.

“Cumbia is so rooted in my childhood, in my upbringing, I knew about [musical groups like] La Luz Roja de San Marco and La Sonora Dinamita when I was like three,” says Pech, who was born in Costa Chica in Guerrero, Mexico. “Cumbia is just so beautiful and it deserves to be praised.”

Normz, who grew up about 400 miles south of Guerrero, in the state of Oaxaca says, “it’s the music our parents would play on a Sunday cleaning the house, you’d just hear it all throughout the neighborhood.”

The summer they worked with the labor rights organization, going out to bars and clubs was a way for them to de-stress. “We were dealing with not only our own turmoils but also the problems of another undocumented workforce,” Pech says.

During that time, dancing became synonymous with healing and replenishment. Three years later, the 2016 presidential election rolled around. “A bunch of us undocumented folks got micheladas and food [after a work day], and we watched Trump get elected, so it was a mix of emotions,” Fajardo says. “We were laughing and talking, but ultimately the night ended sour.”

As months passed, they kept feeling the negative effects of an administration that continued to normalize hate toward the undocumented, immigrant, Latinx, and LGBTQ communities that they and their friends are a part of.

“We would see that folks were getting burnt out and losing hope, so we felt we needed to create a space where people could come out and rejoice,” Pech says. “No matter what, undocumented people, we come together in times of crisis. We come together to hold space for each other, to cheer each other on and to more than anything, let each other know that we have each other’s back.”

From the get-go, Cumbiáton was intended to be an inclusive and positive environment where undocumented and queer people of color could feel safe. Cumbiáton’s main goal was not only to center but to celebrate these often marginalized folks.

“It was like a glimmer of hope, you know?” Pech says. “Yes, we’re undocumented. Yes, it affects us in our daily lives in different ways but Cumbiáton was a safe space to come and forget about that.”

What started off as throwing a party for their close-knit group of friends, soon grew into a bigger experience, a bigger venue, and eventually, a bigger movement meant to be shared with those who needed it.

Now in its second year, Pech and Fajardo say Cumbiáton wouldn’t be what it is without the help of their friends and the community. Organizing alongside the two women are marketing lead Garciela Lopez Marquez (who goes by DJ Funky Caramelo), illustrator Julio Salgado, and photographer Paolo Riveros.

“Through cumbia, we celebrate our immigrant roots. It’s also through the music that we highlight and center womxn and queer/trans folks,” says DJ Funky Caramelo.

In the past year, Cumbiáton has expanded to several other cities, but Pech recalls a time when she wasn’t sure she would keep the party going at all. “There was a point, and it was amidst all this Trump bullshit, where we didn’t even promote the party because as an undocumented queer woman…all of this was… I was just depressed,” Pech says of she put a pause on the social media promotion that Cumbiáton relies on to get the word out (that particular party also had its lowest turnout). At her lowest point, she even considered pulling the plug altogether.

“But then in talking to people, the stories that people always come and tell us, thanking us for creating this space–that definitely encourages us, it makes me feel like this is necessary,” she says.

For the December 2018 party, they stacked the line-up with DJ’s from Subsuelo, Late Night Laggers, Gasolina, Techno Cumbia, Beso, and live music from all-female mariachi and banda Las Catrinas and Las Angelinas. It turned out to be their biggest party of the year, selling out Echoplex.

They say what brings out big crowds is their focus on diversity.

“I’ve never told anyone to bring their grandmas,” Pech interjects with a laugh. “But that’s you, OK, go ahead.”

This month, the Cumbiáton crew is back at the Echoplex with another hefty line-up. On March 15, the party pays homage to all the women of cumbia who have paved the way for DJs like Sizzle Fantastic and Funky Caramelo to share their love of one of the most widespread music styles in the world—and to keep on celebrating their roots through dance.

In the midst of a divisive political climate, Cumbiatón is a force to bring people together. “What they want us to do is mentally disintegrate and to just break our spirits, but what Cumbiáton is doing and what we’re providing is making sure we’re replenishing that spirit, we’re replenishing each other.”

RELATED: For Trans Angelenos, a Job Fair for Gender-Diverse People Can Be More Than a Place to Look for Work