Home Uncategorized The Witch is in the West 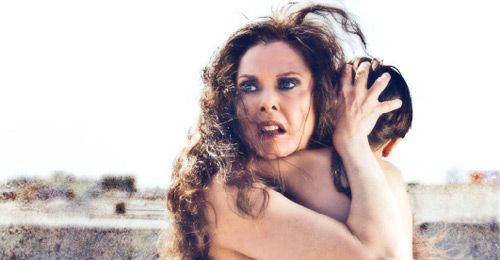 Walking through the UCLA sculpture garden last weekend, making my way to the Freud Playhouse to watch Medea, I felt the Halloween spirit begin to rise. After all, what could be creepier than a play about a witch who kills her king, princess and children as revenge on her husband?

Medea picks up where the Greek myth The Quest for Golden Fleece leaves off. A social climber, Medea’s husband Jason leaves her for Creusa, a young Greek princess. Things don’t go well from there. Annette Bening, who always brings to mind grace and elegance, brings a new face to rage as the mystical title character. Her cool tone and eerie calm as she plots against those who have betrayed her and those she still loves is chilling.

Set in a post-apocalyptic modern world, Medea proves that the ancient Greek’s tragedy’s themes of loss and love are relevant as ever. Euripedes’ writing is surprisingly fresh (and intact in this production), and his jokes about parenthood and women’s role in society (which are sadly still applicable) shine just enough light through the dark and heavy plot.

Unfortunately, The Chorus doesn’t provide the structure it could—and should—to this performance. Clad in leather from head to toe (complete with pleather-looking caps for hair) and bright red bras that flash the audience, The Chorus misrepresents female power. I get the idea of tough-skinned women that retain their sexuality, but they were so reptilian in their movements, hissing and slithering across the stage, that I couldn’t connect—I didn’t want to, frankly—no matter how beautiful their voices.

The lack of an intermission keeps things moving—and the audience sadistically eager to see Medea’s final act of violence: killing her innocent children. While she does us the favor of doing the deed off-stage, she brings the mummy-wrapped corpses out to jab one last stab at Jason (and us all). My stomach lurched throughout. In this case, that’s a good thing.

Medea’s run at the Freud Playhouse ends this Sunday, October 18.