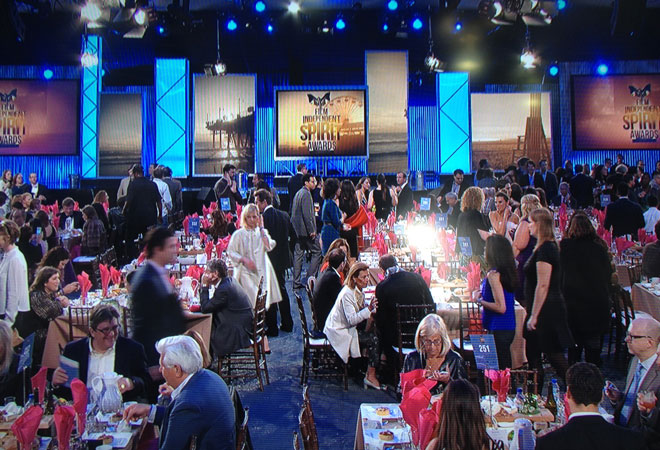 At the 2014 Indie Spirit Awards, the one awards show where people wearing NYU film school t-shirts aren’t seat fillers,* the big winner was 12 Years a Slave. The drama netted statues for cinematographer Sean Bobbitt, screenwriter John Ridley, supporting actress Lupita Nyong’o, and director Steve McQueen as well as winning best feature. But in the lead actor category the film’s star, Chiwetel Ejiofor, lost to Matthew McConaughey of Dallas Buyers Club. The AIDS drama also earned an award for supporting actor Jared Leto, who gave one of the loopiest albeit most entertaining acceptance speeches in recent memory.

Who awards the awards-givers? We do. Here are our picks for the best moments of the 2014 Independent Spirit Awards.

Best Meta-Moment During the Opening Monologue
Patton Oswalt: “Between the Independent Spirit Awards today and the Oscars tomorrow, we are living in a golden age of lesbian awards show hosts and the men who look like them.

Best Meme, Self-Ridicule
“All right, all right, all right.”
It’s McConaughey’s signature phrase but Reese Witherspoon, his costar in Mud, was the first to utter it as the two of them presented the show’s initial award. The phrase cropped later and finally, while accepting his acting award, McConaughey had no choice but to say it, which he did with a grudging self-awareness. Sadly, he did not accept his award while shirtless.

Best Meme, Ridicule by Others
Bruce Dern
Host Patton Oswalt kicked the ribbing during his monologue when he mentioned that Dern, 77, was at the ceremony “to see the beach for one last time. I’m just kidding. He was already on the beach with a metal detector; he just walked over.” Dern took it in stride as Oswalt carried on with the age-specific joke. Later, the host appeared onstage wearing a bloodied white shirt and with his hands bandaged, claiming he had tangled with a delivery drone. A moment later he admitted, “Bruce Dern just kicked the shit out of me backstage.”

Funniest Speech By Someone You’ve Probably Never Heard of
Bob Nelson
The screenwriter who won Best First Screenplay for writing Nebraska, started his speech with: “My wife asked me not to thank her tonight, so that’ll save some time. Thanks, Valerie.” Then he talked about the role of the director in filmmaking: “I won’t reveal Alexander’s involvement in the screenplay but I will tell you the original title was California and it was about two boys trying to score weed.” Finally, he thanked the film’s co-star, Will Forte, “who lost three pounds to play this role.” The whole screenwriting thing seems to be panning out for Nelson but if it doesn’t, he has a career in standup.

Best Shoutout from One Actress to Another
Cate Blanchett, who won best female lead for Blue Jasmine: “Why were there only five female nominations and six male nominations? Did anyone see Greta Gerwig in Frances Ha?”

Best Truly Indie Moment
Accepting the John Cassavetes Award, Chad Hartigan, director of This Is Martin Bonner, summed it up beautifully when he said, “Our movie cost $42,000 to make. I don’t want to say that for cheap applause. I represent a class of filmmaker who truly has no idea if their film will ever be seen when they’re making it.”

Most Touching Speech, Personal
Lupita Nyong’o
In a short but lovely speech N’yongo, who grew up in Kenya, explained how she discovered independent cinema (“In my first year in college I took a class in independent film and realized ‘Oh, this is where stuff happens.”) then thanked her mother for supporting her, driving her to acting classes and auditions, and never complaining. As mom stood up at her table and waved Nyong’o said, “I dedicate this award to my mother who is here with me today. Your love has driven me this far. Thank you.” Not a bad way for the actress, who turns 31 today, to celebrate her birthday.

Most Touching Speech, Political
Ryan Coogler
After the usual thank-yous the director of Fruitvale Station, which won Best First Feature, told the story of Jonathan Ferrell. Last year, the 24-year-old African American college football player got into a single-car crash near Charlotte, North Carolina. It was late at night when he stumbled to a nearby house and pounded on the door for help. The woman who answered thought he was a burglar, slammed the door, and called 911. When police officers arrived, one of them shot Ferrell. As Coogler pointed out, if Ferrell’s skin color had been closer to Matthew McConaughey’s, would events have played out as they did? The speech left many in the audience misty-eyed and earned him a standing ovation.

Most Meandering Speech
Jared Leto
He was the picture of carefully calibrated cool, taking the stage in black jeans, black boots, a plaid red shirt tied around his waist, a black leather jacket, and a striped black-and-white scarf. Leto started by saying, “I’d like to thank the youngest and most inspiring actor in the entire fucking room, Bruce Dern.” And then: “In case it’s the last time I get to thank anyone, I wrote down a couple names… because it’s important to me.” Then he pulled out note cards and started rattling off a litany of names that included but wasn’t limited to: Calpernia Addams, Mark Twain, Ansel Adams, David Bowie, Mozart, C.S. Lewis, River Phoenix, Kurt Cobain, “the 7 million human beings on the planet and all the plants and animals,” James Gandolfini, Terrence Malick, Stanislavsky, Boleslawski, Darren Aronofsky, Maria Bello, Peter Travers, Wayne Gretzky, “whoever makes size 12 heels,” Christopher Walken, homemade burritos, my brother Shannon, my mother Constance, the city of angels, vegan butter, “all the women I’ve been with and all the women who think they’ve been with me,” Dr. Seuss, the CIA, “my future ex-wife; Lupita I’m thinking about you,” people who have died of AIDS, people who are living with AIDS, and “the dark horses, the dreamers, the outsiders.” Good luck pulling that stunt at tomorrow’s Oscars, where Leto is the heavy favorite to win his category. Besides, after you’ve thanked Christopher Walken, vegan butter, and everyone with AIDS in the same speech, who’s left?

And now, the real winners (watch eight of them here)…

Indie Spirits Bring The Fun, ‘F-ck You,’ And Find ‘Lost’ Maggie Gyllenhaal A Lot of Wins