Home Uncategorized The Wild and Unpredictable Nature of Pink Mountaintops 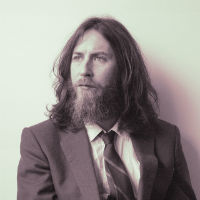 Canadian musician Stephen McBean says he moved to Los Angeles from Vancouver because he fell in love with a California girl. That was part of the reason, anyway. “If you grow up in Canada being a little punk kid who is into skateboarding, California is the place,” says McBean, who has been a staple of Vancouver’s indie music scene for years. He’s well-known as the frontman of Black Mountain (think of it as Black Sabbath for the new millennium) but the singer and guitarist is currently focusing on the amorphous solo project he started in 2004, Pink Mountaintops.

The music encompasses everything from voluminous psychedelic rock to stripped-down but peppy post-punk. McBean as the only mainstay; over the years, Pink Mountaintops has gone through approximately 30 members. The band’s fourth album, Get Back, comes out on April 29 and features guest performances by Annie Hardy and J Mascis. It also features the band’s return to a basic rock ‘n’ roll four-piece with an all-star line-up that includes members of Cat Power, Brian Jonestown Massacre, and Dead Meadow.

We spoke with McBean about working with people you look up to, the beauty of trainwreck shows, and L.A. warehouse concerts.

☆ It’s a common misconception that Pink Mountaintops is a Black Mountain side project, and an understandable one given that the two bands started around the same time. “I guess Black Mountain is more popular,” McBean laughs.

☆ “I came up with the name [Pink Mountaintops] first, which I really liked,” he says. “I think I was in a van driving through Colorado. It popped into my head. I wrote down some lyrics and basically made a four-track demo of the first record after I got home.”

☆ Chris Swanson of Jagjaguwar loved the demo and released McBean’s self-titled Pink Mountaintops album alongside Black Mountain’s debut in 2004. “If you match the covers of the two albums they form a scenic shot of outer space,” McBean says.

☆ On Get Back, McBean is joined by former The Delta 72 frontman Gregg Foreman, bassist Steve Kille of Dead Meadow, and drummer Dan Allaire of the Brian Jonestown Massacre. “I basically had a list of people that I had either played with or wanted to play with,” McBean says. “You kind of think to yourself: Why do all these great people want to play with me?”

☆ McBean enjoys the unpredictable nature of performing. “Part of playing live is risking that everything will fall apart. If things are too tight and rehearsed it becomes stale. You can play a perfect show and then your girlfriend will be like, ‘That show was boring.’ And your like, ‘What are you talking about? It was perfect.’ ‘Yeah, exactly.’”

☆ A 2005 show McBean played with Black Mountain at a downtown warehouse had the perfect mix of structure and chaos. “After a couple of songs the cops showed up, but the organizers somehow managed to convince them to let us play,” he says. “It turned into a really wild show after that. I constantly meet people who will tell me, ‘I was there and it was greatest show ever! That’s quite a compliment.”