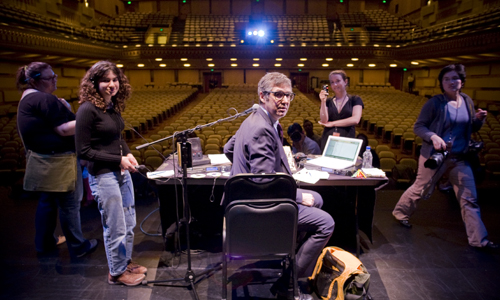 It was less than an hour until showtime on March 27th. Ira Glass sat at his desk, organizing his notes and burning audio tracks from his computer, yellow bag at his feet, ready to build another program from scratch. It looked like a day at the office, only Glass was sitting on a stage, the empty seats of UCLA’s Royce Hall spreading out before him.

“This is very weird,” said Glass, who was surrounded by photographers. “It’s not very often you go to work and have your picture taken hundreds of times.”

“Pro basketball players have to deal with it every day,” I said, breaking the silence of the pack.

“You’re right,” Glass said, looking up from his soundboard and straight at me. For those of us jockeying for position, the validation was significant. Glass’ radio program, This American Life, has been unimpeachable for over 400 episodes and 15 years now. Its host for all but one episode, Glass has researched and investigated nearly every topic under his show’s broad umbrella. His breadth of expertise is impressive, enviable. It was hard to separate the reporters and photographers who crowded beneath Glass’ desk from the ticket-holding fans waiting outside.

Actually, that’s an understatement. Among the members of the press who covered the event, there existed a respect for the host that borders on idolization. The older reporters dressed in serious blazers. The young reporters barely contained their nerves; the lone radio journalist, a young girl who didn’t look too far out from high school, had her microphone pried out of her hand by Glass himself when she couldn’t bring herself to hold it close to his mouth. His first words into her recording were, “There’s nothing I hate more than bad mike placement.” The host giveth, the host taketh away.

He turned in his chair to face me, unsure of what to say, and called the question “clever.” My heart soared. Glass fumbled a bit—this idea of celebrity was—at least apparently—new to him. To diffuse the question, he said he is married to a woman he had known for 15 years. He said he had gotten bumped from his flight earlier that day, that nobody recognizes him in airports, and that when he goes to work, it’s normally in a box.

Yes, I countered, but a box connected to countless people. Here he was, at his desk, photographers capturing his every move, on a night when nearly three thousand people paid to see him do what he does—in person. If Glass wasn’t comfortable with the idea of being a celebrity, I thought, he should probably start getting used to it by showtime.

As I walked off the stage, I ran into Jennifer Ferro, the new General Manager of KCRW, the station that brought Glass to Royce Hall and the second in the country to broadcast TAL. She told me that, for the first few years of the program, Glass didn’t allow his photo to be taken. Working in Chicago, Glass usually wears jeans. But now that his image was on billboards and books and TV programs, he couldn’t escape wearing a well-tailored suit. Ferro and I watched Glass as the reporters squeezed in their last questions and the photographers snapped their final shots. He really wasn’t used to the attention.

Thirty minutes later, Glass was introduced on a dark stage. He started the show like he would start any radio program, the only stimulus being the sound coming from the speakers. He would, Glass joked, do the entire show this way if Ferro would allow it. But the house lights rose and Glass was illuminated once more, to great applause from the crowd. We could see his expressions and his perfect posture, see his hands waving like the sorcerer’s apprentice, flashing through the air as he cued up interview tracks and musical accompaniment. He wasn’t intimidated. He was a natural.

And the show? It was exactly what fans of the radio program have enjoyed for years. Glass was reverential of his interviewees and wry enough to bring out their (usually unintentional) humor. The live show pulled back the invisible curtain and showed how Glass matches music and narration to construct something universally American and unflinchingly poignant.

Angelinos have our routines down—and that includes knowing what we’ll say to the next hot movie starlet (or how we’ll politely ignore her) when our carts crash at Whole Foods. But Glass’ celebrity comes from his intellect. How do you act when you meet that brand of icon? More importantly, how does it feel to be the Alpha Male of the Beta Males?

Ira Glass, man of many words, seemed to have left a few on this topic unsaid. Enough for a program, perhaps. Divided in three acts.