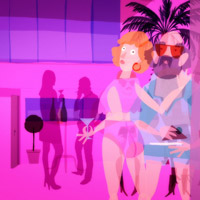 You may not immediately recognize the name Graham Chapman. Many don’t. Even his fellow Monty Python members wryly refer to him as the “Dead One.” This would likely be fine with Chapman, whose 1980 memoir, A Liar’s Autobiography,  wasn’t all that concerned with biographical details and was instead an absurd exercise in storytelling. Or non-telling, as Chapman’s personal recollections are mostly fictional, fractured, and non-linear except for a few kernals of truth he let pop: He was gay. He was an alcoholic. Perhaps most shocking, he was an Angeleno.

For a few years, anyway. After Chapman came out of the closet, he and his partner David ventured to Los Angeles. If there were ever a time to be a soused, funny-looking British comedian in L.A., the late-70s and early 80s were it. This was the era when Dudley Moore was a box office draw and leading man, bedding the likes of Susan Anton. It was a strange time.

His California years—and the rest of his jumbled life—has become fodder for an an experimental feature, now showing at the Aero Theatre with a simultaneous run on Epix. The movie takes Liar’s Autobiography and gives it the surreal, ridiculous, improbable treatment it deserves: A bizarre,  animated, impossible-to-follow biopic with probably the most unrealistic cartoon boobs and raunchy sex scenes witnessed on the big screen since…Heavy Metal? That’s my guess.  For reasons  not necessarily clear but fully appreciated was the decision by  filmmakers Bill Jones, Jeff Simpson, and Ben Timlett  to divvy up Graham’s already non-sensical book into 17 sequences, then do a confetti-throw with each of those scenes to 17 different animators to visually conceive as they damn well pleased. The living Pythons take turns guest-voicing alongside the audio book Graham left unfinished when he passed away from cancer in 1989. Then just in case all that wasn’t enough, the film was converted into 3-D.

The feature, which screened at the Toronto Film Festival in September, is already getting the kind of reviews a deceased Python would appreciate, with the L.A. Times describing it as “insufferable and incomplete.”

We wholly disagree. While not perfect, Liar’s did what more filmmakers ought to do: Trash the standard biopic. Or at least break it over a knee. Movies about famous figures, particularly ones with wild lives and substance abuse problems that eventually end up somewhere tragically fabulous, have become so predictable, so engineered to be “definitive” and “important” you can tell the producers were imagining themselves in Oscar tuxes on the first day of shooting.

Not so here. This movie was essentially one Kickstarter campaign short of a crowdsourced project. A passion project done by scores of talented animators who grew up on Python, it’s a twisted, dazzling visual study with exquisite animation that felt fresh and new. The film doesn’t seek to be important. It just  wants to be weird and fun. Liar’s Autobiography is the ultimate inside joke enjoyed by your circle of goofy friends late at night. Just like Monty Python once was.