Home TV The Truth Behind the Pretty Little Liars: PaleyFest 2014 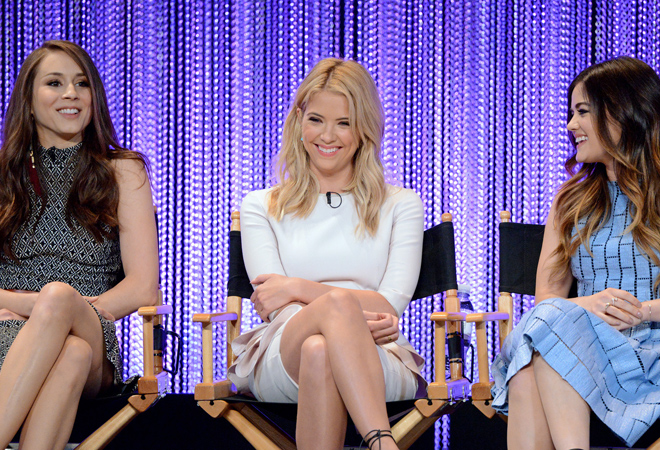 Yesterday Pretty Little Liars became the first ABC Family show to be featured at PaleyFest. Fans of the soapy high school crime drama (average age: 16) about four teens who are ruthlessly cyber bullied after their best friend goes missing, got the chance to “fan girl” (as one 12-year-old said) at a Sunday afternoon discussion panel.

If you can’t keep the zigs and zags of the plot straight, no worries; neither can the cast. Ashley Benson (who plays Hanna Marin) admitted that Troian Bellisario (Spencer Hastings) is the only one who actually has any clue what’s going on in the fictional town of Rosewood, Pennsylvania.

To an audience comprised of screaming eighth grade girls and about three men, the show’s cast and creative team revealed that all the unsettling questions currently swirling around the show will finally be answered.

Is Ezra actually a bad guy? How did Alison become so terrible? Is there more to Toby than rock-solid abs? (Yes, that’s a significant issue.) Answers to all these quandaries will be finally answered during Tuesday’s finale. After four years of being thrown deeper into the dark, fans “have been patient and earned them,” said executive producer Marlene King.

With season four wrapping up, King promised that the upcoming season of Liars will basically be a brand new show with a previously unseen dynamic. Season five will revolve around the miraculous homecoming of Alison DiLaurentis (Sasha Pieterse), who has only been seen in flashbacks because they thought she was dead. The blonde bully will make a dramatic turn from villain to victim in the new season, but it will take some time before the characters—and the fans—forgive Alison for all her manipulations. Plus, season five will boast the triumphant return of Caleb now that Tyler Blackburn’s stint on the failed spinoff series Ravenswood has ended.

The cast members also used PaleyFest as a platform to make their own requests and predictions for upcoming episodes while executive producer Oliver Goldstick took notes. Janel Parrish (Mona Vanderwaal) asked for a full-blown, down and dirty girl fight between her villainous character and the newly resurrected Alison (yes, please!). It’s no shock that most of the cast is musically talented, especially the show’s star and recently minted country singer Lucy Hale (Aria Montgomery), who’s pushing for a musical episode. Fans can also begin salivating at the idea of a Pretty Little Liars feature film, which King claims they “talk about all the time.”

It wouldn’t have been a panel of beautiful, young starlets if behind-the-scenes details and embarrassing moments didn’t surface. From a discussion of the painfully intimate sex scenes between Spencer and Toby (played by Keegan Allen) to the embarrassing green Christmas sweater that fan-favorite hunk Ian Harding (Ezra Fitz) wore to his audition, the youthful audience heard plenty of stories to keep them laughing and loudly “woo”-ing with pleasure.

In preparation for Tuesday night, the cast and crew recommended that fans properly hydrate and have tissues ready, as they can expect another dramatic and emotionally scarring season finale.