Home Uncategorized The Summer of Too Soon: Hollywood Reboots, Um, Everything 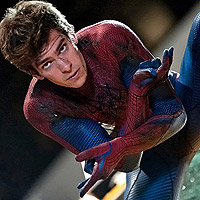 The surroundings were different but the movie was familiar: A scrawny, teenage geek gets bitten by a spider, turns into a superhuman masked vigilante, and ends up saving the world from some sort of chemically-imbalanced villain. The only, difference, however, is that it was The Social Network’s Andrew Garfield slinging across the screen in a Spidey suit instead of Toby Maguire. A new Spiderman already? Too soon.

It feels like Sam Raimi’s Spiderman trilogy only hit theatres very (very) recently. Regardless of this year’s fresh cast—Garfield is joined by Emma Stone, Rhys Ifans, and Dennis Leary—the story feels too familiar. The last time we saw Spiderman in theatres was only five years ago. Does that mean I didn’t love The Amazing Spiderman? No. In fact, I thought the on-screen duo of Garfield and Stone were far more charming than Maguire and Kirsten Dunst, but that doesn’t mean I’m ready for a reboot. Not yet.

Hollywood loves a good remake. By the end of this year, nine will have been launched including already-released 21 Jump Street, The Three Stooges, Dark Shadows, Mirror, Mirror and Snow White and the Huntsman (because we needed two reinterpretations of the same fairytale). In the coming months, there will be a reboot of Total Recall, Dredd, and Red Dawn, which should prepare you for next year’s Man of Steel, Dirty Dancing, and The Lone Ranger reboots—only three of 10 that are slated to hit the big screen in 2013.

The Wall Street Journal recently reported that DreamWorks spent $155 million to acquire Classic Media, the company that owns the rights to characters like Casper, Fat Albert, Lassie, and Richie Rich. The studio didn’t buy these characters to let them gather dust; if we were the betting kind, we’d expect to see pumped-up comebacks for these characters in the next few years. On top of that, Sony recently announced an impending remake of Jumanji. Don’t fix what ain’t broke!