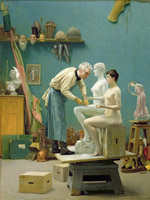 My knowledge of art can be sketchy. I once remarked to one of Picasso’s grandsons that his gramps painted in such a “pretty blue” as we both looked on at a canvas from a certain Period. I didn’t know anything about Jean-Leon Gérôme (1824—1904) before going to the Getty’s opening this week—or so I thought.

When the curator-led tour wound its way around to the gladiator/arena paintings, I recognized that director Ridley Scott cribbed from Gérôme for his film Gladiator. I’d seen recreations of Gérôme’s The Death of Caesar painting many times, from silent pictures to HBO. Vivid paintings are mixed in with photographs and sculptures from a Frenchman who sort of got nudged out of popularity at the time by Impressionism and the modernist avant-garde. If he were alive, he’d be having his Betty White moment—this is the first major exhibition of his work in 40 years and the reconsideration of what scholarly types called “his importance.” The opening was exhilarating and humorous and, unfortunately tinged with sadness by the untimely passing of Getty Trust President and CEO James N. Wood last week. Acting Director David Bomford remarked, “He came to the Getty in a time of crisis and just three years later the Getty is on solid footing…He was a great enthusiast of art from the 18th Century and we miss him very much tonight.”

The exhibit is up until September 12th but get the skinny with a gallery talk by assistant curator of Paintings, Scott Allan: Thursday, July 1, 29, and August 26 @ 1:30 p.m.