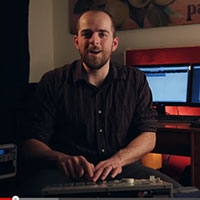 “People have responded really emotionally to it,” says Jon Armstrong of his new album Farewell. Recorded with the Jon Armstrong Jazz Orchestra, the record counts Daniel Rosenbloom, Gavin Templeton, and the Blue Whale’s Joon Lee among its fans. The 31-year-old Oregon native cut his teeth in the Seattle jazz scene made a name for himself in the Seattle jazz scene performing with the funk groups Cast of the Akwada, Pocket Change, and Goody Bagg. In 2006 he relocated to Southern California to attend CalArts. Since then, he has moved toward a sound he loosely defines as orchestral jazz. “But to me,” Armstrong says, “the orchestra is just a tool to get a wide range of sounds and compose an interesting journey for listeners.”

In high school Armstrong was a fan of Radiohead and electronic music; then a friend introduced him to the classic Beach Boys album Pet Sounds. “I listened to it as I was driving across Oklahoma in an Oldsmobile. At first I didn’t get it. By the tenth listen I realized that this is a seminal piece of art,” he says. “I want to write music that is like that.” Armstrong has been a fixture on the Los Angeles jazz scene since relocating from Seattle a few years back. He has performed with Mike Barone, Vincent Gallo, and Bennie Maupin, among others.

Armstrong will be performing with L.A. jazz joint regulars Slumgum, who fuse world music with modern jazz, at Angel City Jazz Festival on September 25. We spoke with him about his latest album, starting a new chapter, and hustling it out as a jazz musician in L.A.

★ “There’s so much good jazz and so many good musicians in L.A. right now,” Armstrong says. “I was so fortunate that every single person in the band was so good. All the parts were written with them specifically in mind.”

★ Armstrong sees himself as a curator of experiences. “As a composer, at the end of the day I try to get better at designing an experience for the listener. There’s almost a narrative arc I want to show people when they listen.”

★ When asked why he titled the album Farewell, Armstrong explains that the album is a way of shedding his previous self. “When my wife and I were married in 2011, she said this thing to me that really blew my mind. She said if you’re going to sustain a lengthy intimate relationship you have to kill the idea of the person you have in your head and accept the person in front of you.”

★ Armstrong has struggled with what he calls his more “adolescent tendencies.” The title track, which popped into the composer’s head as he was working out on the elliptical trainer, is a meditation on setting aside childish things. “Do you want to smoke weed every day, or do you want to look ahead, I asked myself. It’s about starting a new chapter.”

★ So far Armstrong has performed with the full line-up from the album only a handful of times. “It’s an intense experience getting everyone together,” he says. “I kind of want it to be for a special occasion.”

★ Armstrong loves conducting and being in front of a big band. “Part of what I wanted to do with this albums was to feature some of the amazing musicians in this city who are just hustling. L.A. really does inspire me. People do their thing here with such vigor and passion. It’s really poetic.”

Jon Armstrong will be performing with Slumgum at Angel City Jazz Festival on September 25; you can pick up a copy of Jon Armstrong Jazz Orchestra’s Farewell here.