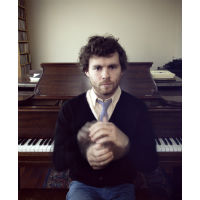 “I’ve always had a romantic attachment to buildings and the stories that live in them,” says Venice-born singer songwriter and composer Gabriel Kahane, whose 2007 concert piece Craigslistlieder, based on actual Craigslist ads, brought him into the spotlight. His third and latest albumThe Ambassador, which came out in early June, is a chamber-music-meets-contemplative-folk-rock hybrid inspired by Los Angeles and its architecture.

Recorded and co-produced by Kahane, Rob Moose of Bon Iver, Matt Johnson of St. Vincent, and Casey Foubert, who plays with Sufjan Stevens, The Ambassador has been well received, due in part to its cerebral nature. (“Learning To Look At L.A.,” an accompanying essay Kahane wrote for the New Yorker online, cemented its intellectual bona fides.) Named for the now-demolished Wilshire Boulevard hotel where Bobby Kennedy was assassinated in 1968, the album revolves around ten iconic L.A. buildings, making the album a kind of map.

“A writer remarked on how almost all of the songs elude to death in one way or another,” says the New York-based Kahane. “There is a kind of elegiac quality to a lot of the stories that interest me.” We spoke with him about his relationship with Los Angeles and how he discovers emotion in concrete buildings.

★ Gabriel Kahane is the son of Jeffrey Kahane, a concert pianist and the conductor of the Los Angeles Chamber Orchestra. He was born in Venice but grew up in Northern California and on the East Coast, which left him with what he calls “a kind of dogmatic antipathy towards L.A. But then in 2012, I was driving to LAX at five in the morning and I just became really overwhelmed by the greatness of it all.”

★ The early morning epiphany led to an idea about the city. “You have two versions of L.A. There’s the mythological, aesthetic L.A that you know from TV and fiction, an L.A. that is an aesthetic projection. You [also] have the L.A. that is very vulnerable. A city that is prone to earthquakes, fires, and the Santa Ana winds. Architecture sits between the two. It’s both an aesthetic projection and something very real that burns or crumbles. The idea of organizing a record around architecture and erasure became really compelling.”

★ Kahane’s thoughts on the subject are informed by two famous books that attempt to contextualize Los Angeles’s unique character: Reyner Banham’s 1971 The Architecture of Four Ecologies and Mike Davis’s 1990 City of Quartz, each of which explore the landscape of Southern California as destiny, albeit in different directions.

★ Big screen portrayals also shaped his impression of the city. “[CalArts professor] Thom Andersen’s Los Angeles Plays Itself was a huge influence in formulating how I saw,” Kahane says. The 2003 documentary, which has never been commercially released due to rights issues, explores how L.A. is depicted in movies using an exhaustive series of clips from decades of cinema.

★ Buildings contain memories, and not all of them fit onto The Ambassador: “One of the songs that didn’t make the album is about the Castle on 325. S. Bunker Hill Avenue. The Castle is an old Victorian building and there’s an iconic photo of it in which you see the Bank of America building in the background. It captures an incredible transitional moment in the history of the city.”

Kahane is currently putting the finishing touches on a stage version of the album, which will be performed at UCLA in February next year.