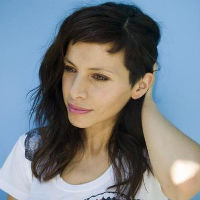 Ceci Bastida grew up in Tijuana playing the piano because her mother told her to. “I guess that’s where it all started,” says the singer who lives in Los Angeles with her husband* and daughter. In the early ’90s at the age of fifteen, Bastida was asked to join Mexican ska-punk pioneers Tijuana No! as a vocalist. Since then her career has flourished.

★ Her career includes a stint performing with Mexican-American singer Julieta Venegas and a solo album, Veo La Marea, that came out in 2010, but the experience of playing with Tijuana No! shaped her. “We were a band who spoke out about political issues. We talked a lot about immigration because that’s always present in your mind when you live in Tijuana.”

★ La Edad de la Violencia (The Age of Violence) is full of Bastida’s signature pop melodies influenced by everything from electro pop to norteño, but one development shaped the album in particular: becoming a mother. She began writing the songs for the album while she was pregnant with her daughter in 2011.

★ As a teenager, Bastida was influenced by punk music: “I listened a lot to The Clash. Even if you’re not paying attention to the lyrics, the song structure is great. The Clash wrote really danceable music. They’re powerful songs. They modeled me back then.”

★ The music comes first: “The first instrument I go to is the piano. Sometimes I just have an idea in my head and I’ll build a melody line off of that. I have a very clear vision usually.”

★ Her approach to writing lyrics has changed over the years. “I used to talk a lot about immigration from the point of view of someone who’s from Mexico. But since moving to L.A., I’ve gained a different perspective. The lives people live and the struggles they go through once they are in the country. All the new laws designed to push away immigrants. That has been hard for me to ignore.”

★ “I was thinking about the violence in Tijuana but also the shootings in schools in the US,” Bastida says. “I think for me it was therapeutic to do this album. It was a way to think about this world differently. There’s a lot of beauty too, and I wanted to look at that as well.”

★ On the art scene in Tijuana: “The interesting thing is that tourists stopped going. It was very empty when you went there, but the artists’ community flourished. They didn’t let the violence push out the art.”