Home Uncategorized The Room is the Best Worst Movie Ever Made. Now There’s A... 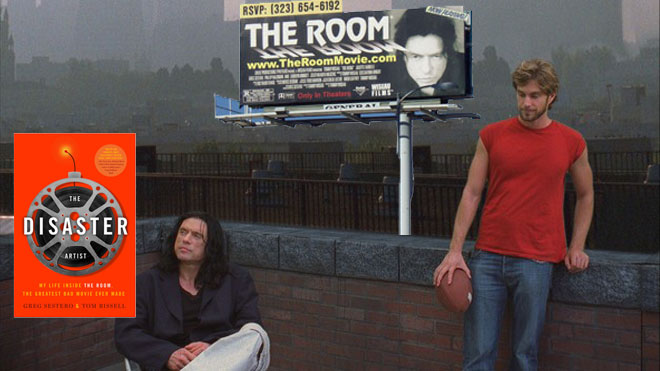 Among the many improbabilities in The Room—the cinematic train wreck frequently dubbed “the Citizen Kane of bad movies”—the most basic is that Mark is best friends with Johnny.

Mark (played by Greg Sestero) is a dreamy twenty-something with soap-opera star looks. Johnny (played by Tommy Wiseau who also wrote and directed the film) is a muscular, middle-aged, alien-looking banker who with his indecipherable accent drops conversational bombs like, “I cannot tell you, it’s confidential. Anyway, how’s your sex life?”

We’ll buy golden-boy Mark stealing Johnny’s girl and ruining his life, but the two of them as besties? Unbelievable. And yet it’s true.

In The Disaster Artist: My Life Inside The Room, the Greatest Bad Movie Ever Made, Sestero covers his long and sometimes trying relationship with the enigmatic Wiseau, from their initial meeting in a San Francisco acting class to the challenging production. (Check out Sestero’s Reddit AMA here.)

For those yet to wallow in the mire that is The Room, the film defies nearly every convention of filmmaking, storytelling, logic, and human speech. Major plot points arise out of nowhere then disappear. (Breast cancer diagnosis? Never speak of it again.) When characters are lucky enough to have a motivation, they declare it with all the subtlety of a bag of rocks to the head. And good luck trying to figure out which room is the room; there are two. The Room is an unmitigated disaster but it’s so earnest in its message, it’s impossible to look away. Or stop laughing. (Check out Patton Oswalt’s hilarious Tommy Wiseau parody.)

In The Disaster Artist, we learn some fascinating tidbits from Sestero as he reveals the man behind the madness, Tommy Wiseau.

A devotee of James Dean and Marlon Brando, Wiseau was determined to have an acting career at all costs. The self-styled auteur famously spent $6 million inexplicably shooting his vanity project on both HD video and 35mm film. Wiseau had enough cash to purchase the equipment and pay for a promotional billboard on Highland Avenue—for five full years. He was also the landlord/roommate from hell.

The book is actually two intertwined narratives. It opens with Sestero’s decision to play Mark before flashing back to his early career and first encounter with Wiseau. He’s an engaging storyteller who takes us from football games in Golden Gate Park to ludicrous parking lot film shoots, peppering the journey with whip-smart insights and laugh-out-loud jokes. The Disaster Artist reads like a technical manual to the film’s strange logic, albeit one that’s been translated from Kurdish to Japanese to English. It’s full of a-ha moments and satisfying trivia, like how Juliette Danielle came to be cast as Lisa, drug dealer Chris-R’s real-life career as an Armenian motivational speaker, and the origin of Wiseau’s now infamous wail, “You are tearing me apart, Lisa!”

As you read it’s hard not to wonder why, if Sestero and Wiseau were such close friends, Sestero would write this tell-all—or how they’ll stay friends. Sestero may be hoping for some image rehabilitation, perhaps a jumpstart for a career that stalled somewhere around the time his IMDB profile became inextricably linked with The Room. In his telling, and without much effort, Wiseau comes off as paranoid, self-aggrandizing, vain, incompetent, and comical. But there also emerges a deeply affectionate, humane portrait of an Eastern European boy in love with the American Dream, who scratched his way up from poverty, amassed a mysterious fortune, and carved out a life for himself in a city that knows a thing or two about oddballs.

Enthusiasm, generosity, and boundless optimism are what drew a young Sestero to Wiseau. They’re also what keep us turning the pages, even after our laughter subsides. And the content hasn’t stopped Wiseau from appearing alongside Sestero at a recent reading at Book Soup. In writing The Disaster Artist, Sestero may have secured for Wiseau what he always wanted—everlasting stardom.

Co-authored with journalist Tom Bissell, The Disaster Artist was released on Oct. 1 by Simon and Schuster.