Home Uncategorized The Road to Cali 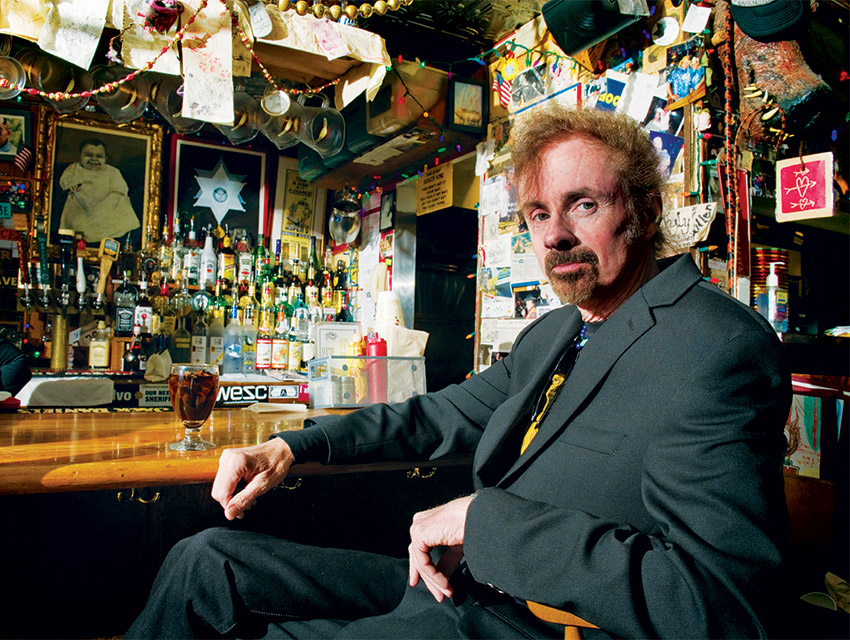 The writer T.C. Boyle (protocol, rumor has it, requires that one call him “T.C.” for a few years before graduating to “Tom”) started his career with a reputation for being a bit of a New York smart aleck. Most of his early writing was laced with high irony. His novels and short stories, peopled with punks and tycoons, embodied a curiosity with the broad streak of invention in the American character and with the huge egos that shaped the nation in the 1900s. “It has taken me a while to write without irony,” Boyle says, the sardonic edge having been replaced with a classical respect for narrative and a specific fascination with his own backyard, namely, Southern California. “I have a certain perspective on this part of the country,” he says, sitting on the porch of his Montecito residence, a lofty, light-filled Frank Lloyd Wright Prairie-style house he has lived in for the past 19 years. “It’s because I’m not from here. I’m an outsider.”

Now 63, Boyle has come to appreciate the physical landscape of Southern California as much as the culture. “This place has opened me up,” he says, which could be the reason the East Coast irony has fallen by the wayside. Six of his 14 novels unfold in these environs. Several tap into the lives of real people, but the author is quick to point out they are fiction. One, Riven Rock, is based on an estate within walking distance of his house; the last two take place on the islands off Santa Barbara. San Miguel, to be released this month, is the story of two families who lived on the windiest and wildest of the Channel Islands. The first, the Waters clan, arrived in 1888; the second, the Lesters, in 1930. Marantha Waters is consumptive, and the island air is expected to revive her. But she comes from an elite background and is reluctant to participate in her husband’s push for independence. Elise, the young wife in the Lester group, is delighted with San Miguel. It is only when a tragedy befalls the family that she agrees to leave. The layering of these isolated lives, the archaeology of human habitation, the different responses to self-sufficiency make this one of the most satisfying novels in Boyle’s canon. It also emerges, whether intended or not, as a Golden State tale: pioneers, solitude, the gorgeous coastal landscape. We could hardly be anywhere else.

A meticulous researcher, Boyle based his story on the work of local historians as well as on letters and journals passed down by the Lester family. He made only one trip to the island—he is not, he explains, that kind of writer. His books are carefully imagined and often driven by a sense of wrongness. “I don’t want to see things,” he says. “I’m not a journalist. I never go to the morgue. I am, however, horrified by everything all of the time. Constantly horrified. You don’t have to experience things in real life in order to write about them. You just have to be affected by them. I love to do research, but the real fun lies in inhabiting your characters. How do they feel? What happened to them? How do they conduct their relationships?”

He says he wrote the novel “during our great depression a few years ago” in part because, in times of economic austerity, people are thrilled by self-sufficiency. The Lesters themselves, living through the Great Depression, received enormous media attention. A 1940 Life magazine article sealed their fame with the nickname “Swiss Family Lester.” The article tells the story of how Lester, “badly shell-shocked during the war,” took his family to San Miguel to “get away from it all.” It describes the two daughters’ homeschooling, the weather-beaten ranch house, the 1,000 head of sheep to be tended.

The shocking power of the place is perhaps best captured in this description of Marantha’s first impression of the island: “She went to the front door—never mind how poorly hung it was—and pushed it open on the pale streaming sunlight. The wind had died. It was almost warm. All the scents of nature came to her at once like a dose of smelling salts—the barnyard and its ordure, the wildflowers blanketing the hills, sage, lupine, the sea—and it was as if she’d never been alive till this moment, because this wasn’t the exhausted sterile atmosphere of the parlor, the restaurant, the public library or the doctor’s office or any confined space, but something else entirely. It was primitive. Untainted. Fresh. Fresh air, the air that would cure her.”

Boyle’s literary ancestors are so obvious, they might as well be sitting in the room: John Steinbeck, Mark Twain, Sinclair Lewis, Raymond Carver, and a dash of the poet William Carlos Williams. Boyle was raised in Peekskill, New York, went to the University of Iowa for an M.F.A. at 25, and studied with John Cheever. He entered the American literary scene with short stories that verged on ruthless, in the way Carver was ruthless, told in a take-no-prisoners style that made J.D. Salinger’s attack on phoniness look like a comic valentine. His characters regularly drowned in their own hubris as readers laughed at their foolishness. World’s End, his 1988 novel that won a PEN/Faulkner Award, was typical of that darkly satiric take on American history, while the short stories in 1985’s Greasy Lake were full of American fears of nuclear annihilation. Writing was a gloomy messenger—“All writers kill themselves,” he says, followed by a quick, “Just joking.” In 1978, he came west to teach at USC, and the slow infusion of light and narrative in his writing is not unlike those pH strips chemistry students use to measure the change from acid to base.

Boyle’s house is distractingly magnificent. An entry with a low ceiling leads to a great room filled with windows. The writer, who is well over six feet and prefers dressing in a style that mashes up the East Village with Cali surf culture, has to bend to enter it. He’s an unsettling, mercurial presence—listening, kind, avuncular one minute, a cloud passing across his brow the next, his angular features drawing into a cloak-and-dagger glare. “Frank Lloyd Wright was a bit of a punk,” Boyle says of the architect whose relationships would inform his 2009 novel, The Women. “He loved hidden places.”

The writer seems more enamored of the woods surrounding the house—the Monterey pines, melaleucas, pittosporum, and coast live oaks; the hummingbirds, raccoons, and rats that “like to party at night.” He has three children, all in their mid- to late twenties. His daughter, a writer and filmmaker, lives in the house next door. When he needs more quiet, he retires to his house in the Sierra, in the midst of century-old redwoods.

For 34 years he commuted to USC, where he launched the school’s writing program. He taught his last class in April and is now a writer-in-residence. “I’m a lifelong teacher. My job is to turn them on,” he says.“ ‘I’m going to shut out the lights and give you a story,’ that’s what I tell them. And I have to make it good because why else would an 18-year-old want to read a novel? What if novels were the only act in town?”

Writing, which he often describes as “jamming,” gives Boyle a feeling of power that he is not shy about. He relishes the book tours, the readings and public appearances, the fans who flock to his events. He recalls reciting a story in which a young girl is killed in an automobile accident, which caused a woman in the audience to sob during the entire reading. “It’s OK,” he told her afterward, “it’s only a story.”

As for the Lesters of San Miguel, Boyle sensed something in their saga that would speak to every reader. Clearly their efforts to reinvent themselves have roots in American mythology. But their eccentricities, their unwillingness to act in a familiar fashion, to compromise or give in to a status-driven, herd lifestyle, are particular to Southern California. After all, this is where the great families of the East Coast sent their black sheep, their convicts.

Boyle believes in the power of stories. He’s constantly conceiving new voices, creating characters from many backgrounds. He is, in fact, a sort of literary melting pot, a test cook for the American dream: What happens if you add a bit of tragedy, a bit of comedy, some money, some talent, some passion, some sorrow?

Yet his books do not always get stellar reviews, despite his universally acknowledged centrality to American fiction. The criticism may well be a function of the East Coast machine. The novels in which the larger-than-life idealism of his protagonists becomes fanaticism (The Tortilla Curtain, A Friend of the Earth, and When the Killing’s Done) seem to irritate critics, who accuse him of preachiness. This is not unusual. Southern California fiction often offers up characters who seem like caricatures to the eastern literary establishment, which tends to praise subtlety and understatement.

Boyle has avoided working in Hollywood, though several of his books have been made into movies, notably 1993’s The Road to Wellville, starring Anthony Hopkins, and the short story “Chicxulub,” which appeared in The New Yorker in 2004. The author recently sold his papers to the Harry Ransom Center at the University of Texas at Austin. Much of the work had been stored in his Montecito basement. He is surprised that the university wanted the papers—the drafts, letters, and various scribblings—and not the audiovisual material: “Here we are in the digital age, and they want the paper!”

Boyle writes until two or three each day and then walks and ruminates. He is wrapping up an introduction to the second volume of his collected letters and preparing a new novel. He has what he calls a “California attitude.” “I work on a story until it’s right. Then I might show it to my daughter. If she likes it, if my wife likes it, then it’s done.” The miracle, Boyle says, lies in the emergence of the unique voice—“No one could have written it but you.” He remains amazed when a story is finished: “Three weeks ago there was no story. Now there is one, invented characters, landscapes, relationships.” A hummingbird hovers over the table for a moment. One can’t help but wonder who has the faster metabolism.