Home Art How a Chinatown Studio Is Making the Art of Screen Printing Even... 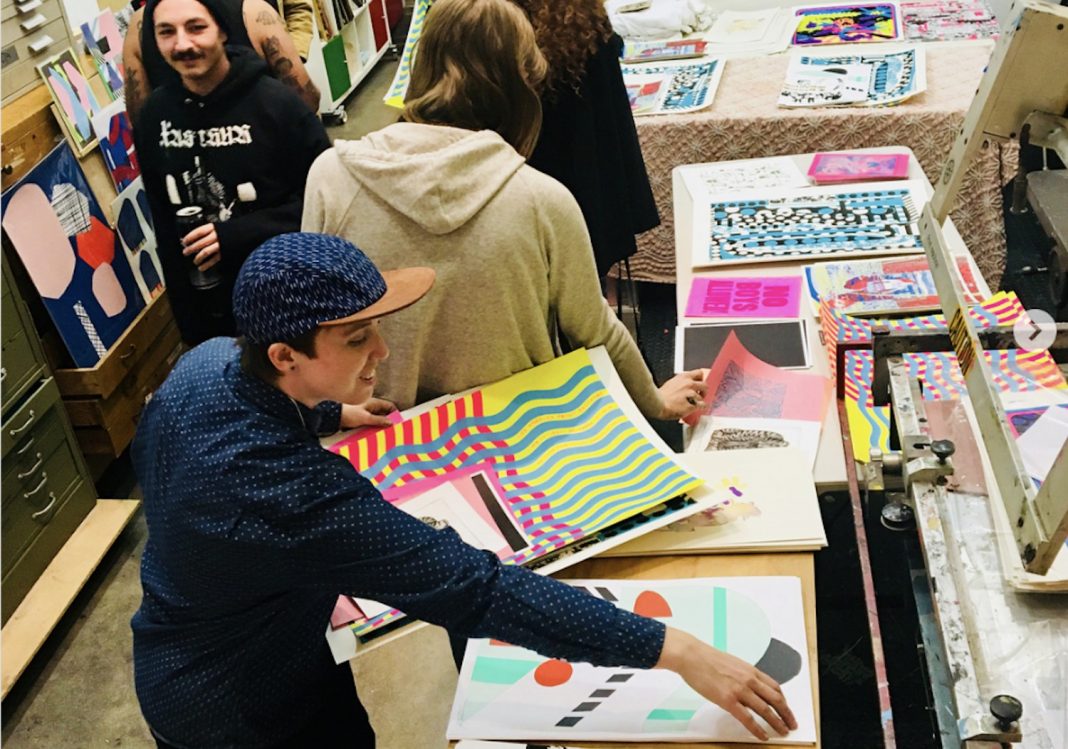 In the back of the Print Shop L.A., there’s a large, clunky machine, its beige and off-white exterior mottled with splotches of colored ink. If it looks like a relic from a 20th century office, that’s because it is. These days, though, the machine—known as a Risograph—is a tool for making art.

“It’s really a screen-printing machine if you look at it because it makes a stencil inside and each color is printed individually so you have to feed the sheets through for each color and put an actual drum of soy ink inside the machine,” explains Michelle Miller, one of the four artists who runs the Chinatown print-making studio. “It’s a really fun, retro-feeling process.”

“They were originally used as a cheap alternative to color copies in schools,” adds artist and co-founder Jayes Caitlin.

In recent years, the antiquated technology gained a second life among artists who could use it in ways similar to screen printing. The Print Shop L.A. is one of very few places that has the machine, and it’s become a popular feature at the studio. When the shop hosts Risograph workshops, the sessions fill up fast.

“I think a lot of people who have heard of Risograph and have never had an opportunity to use one want to use it,” says Caitlin.

Right now, the studio is preparing to auction off its Risograph GR2750 at an event on February 9, coinciding with the neighborhood’s Chinese New Year Parade and Festival. The shop is making way for an upgraded Risograph machine that’s being donated—which is good news for L.A.’s arts community at large.

Last June, Miller, Caitlin (Heavy Gel), and artists Sean Hernandez (Press Friends) and Dave Kloc, joined forces to launch the Print Shop L.A. on Chung King Court. The four artists are stylistically different but they’re united in a mission to create a space where artists have access to print-making tools and where the general public can learn how to do it as well.

Caitlin started a studio while living in Chicago in 2012 and moved to Los Angeles not long after that. Over time the crew grew and decided to expand and move into the Chinatown space after hearing from other artists who wanted to work with them.

The studio is hidden behind A.G. Geiger Fine Art Books, which operates in the front portion of the same storefront. The ground floor of the space is filled with hefty equipment— everything from a vacuum table and a guillotine paper cutter to drying racks—and examples of their work. In an upper loft, there’s a device for relief and etching work. Down in the basement is a dark room and more print-making equipment.

Their services range from screen printing to etching. They have no minimum for editions. And their workshops cover subjects like how to prep your digital files for silkscreening to how to screen print your own one-color T-shirt.

Sometimes, bands pop in to learn how to make their own merch. “Usually, they come in with some grand idea with a ton of colors,” says Miller, “and I kind of explain if you can make this two colors and make the shirt a lighter color and the ink a darker color, it will be the easiest printing for a beginner and the cheapest for you.” Other times, parents and children come into make T-shirts for family events. Once, Caitlin worked with a pre-teen who wanted to make a line of T-shirts for a business class at school.

The Print Shop L.A. is providing a service, but the artists who run it are also aiming to create a community for people who are interested in print-making. “We’re really lucky that we were able to get this space for the price that we do so that we’re able to provide all of these classes and services affordably, but it’s a lot harder in L.A. than other cities,” Miller says. And, he adds, having the opportunity to develop those skills can be important for artists today. “I think that printmaking is such a tool and having [a lot of] tools in your belt as an artist is the only way to make it in today’s climate.”

RELATED: This Group Art Show in Chinatown Has No Art