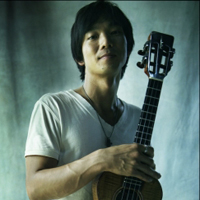 You may not know how to pronounce his last name, but chances are you’ve heard the music of Jake Shimabukuro (pronounced she-ma-BOO-koo-row, natch). The ukulele sensation from Hawaii became a YouTube hit for his renditions of songs by George Harrison, Queen, and Leonard Cohen. Now he’s touring behind a #1 album, Peace Love Ukulele. He stops at L.A.’s Zipper Hall on Wednesday.

How is Peace Love Ukulele different from the other albums you’ve released?
It was my first independent release and I really took my time with it. And it’s an ensemble record. When I’m performing a song as a soloist, in my head I imagine the drum parts and the base line and the piano line, and I wanted to produce something that would serve as a reference for the audience. That way, when I play the songs alone, the audience will know what other parts I’m trying to mimic. They can fill in the missing parts.

Was it difficult for you to record with other musicians?
No. It’s always a challenge, but that’s how you get better. When you go into the studio or get up on the stage with people who have more experience or knowledge, you learn.

I read that you believe the world would be a better place if everyone played the ukulele. Why is that?
I tell people that all the time. There’s just something about the sound. Everything falls in the upper register, so it’s like a music box. It’s impossible to be angry while you’re strumming a ukulele. There’s no ego when you’re a ukulele player. The instrument just brings people together and makes them feel good. It’s very therapeutic. There’s nothing like coming home and strumming your ukulele, especially after a long day at work. It’s an entire yoga session in one strum. You know, all our gadgets are getting smaller. With our musical instruments, the ukulele is already perfect. It’s the iPad of instruments.

You cite Bill Cosby as an inspiration. Explain.
Bill Cosby inspired me to be a solo performer. When I was growing up there was no such thing as a solo ukulele performer. But I remember watching Bill Cosby: Himself and he’s just sitting in a chair with a mic telling stories and keeping everyone at the edge of their seats. I’ve seen it hundreds of times. It showed me that it’s not just about the technical work but also connecting with an audience. Bill Cosby takes that to another level. I thought if Bill can do it without an instrument, then there should be some hope for me. Plus, I like that he doesn’t use any profanity.

So you don’t have a dirty mouth?
No, no.

You’ve done renditions of “Thriller,” “Let’s Dance,” and “Bohemian Rhapsody.” What’s your favorite song to cover?
Recently it’s been an old Journey tune, “Don’t Stop Believing.” But “While My Guitar Gently Weeps” is my all time favorite. That’s the song that really started everything for me. A video clip went viral on YouTube and that started an entire touring career for me. We wouldn’t be talking today if it weren’t for that video. It’s also one of my favorite songs. Every time I play that song it’s an honor.

So what are you looking forward to doing while you’re here in L.A.?
This trip is going to be a little tight, so I’ll be seeing a lot of the airport and the venue. But there’s always time for an In-N-Out burger.