Home Uncategorized The Play's The Thing 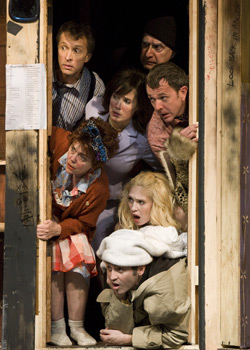 “Am I putting him on or vice versa?”

It’s a quote from screenwriter Marty Kaplan’s 1992 film adaptation of Noises Off, the perfectly absurd play about the perfect absurdity of putting on a play, written by Michael Frayn in 1982. It’s also one of the quotes my dad and I toss back and forth when the people in our lives get wacky, and it has been since we first saw the film starring Carol Burnett, Christopher Reeve, John Ritter, Nicollette Sheridan, Marilu Henner, and Michael Caine and directed by Peter Bogdonovich. That was sometime before laser discs (we later bought, then lost a treasured copy). Still, I didn’t see Noises Off the play until the classical repertory company A Noise Within debuted their production in Glendale last fall.

To any production—film or stage—the first act of Noises Off is crucial: A “tech” rehearsal of Nothing On (the play within the play), it introduces us to the characters of Noises Off and the characters they play in Nothing On. Still with me? Good. Here, Geoff Elliot (as exasperated director Lloyd), Deborah Strang (as washed-up star Dotty), Jill Hill (as drama-queen Brenda Blair), Stephen Rockwell (as oversensitive actor Federick), Mikael Salazar (as vocabulary-challenged actor Garry), Apollo Dukakis (as alcoholic old-timer Selsdon), and Lenne Klingaman (as fragile stage manager Poppy) do a fine job setting up the ensuing farce. At times their lines, often passive-agressive quips that end in “darling,” pass too quickly to sink in, but the players pick up depth as they go on. Emily Kosloski, who only recently joined A Noise Within and plays dim-witted beauty Brooke, and Shaun Anthony, who plays overworked stagehand Tim, are fun to watch throughout.

The production’s impressive staging—a large set that requires seven crew members to turn around between the first and second acts and back again between the second and third—keeps the audiences in on both sides of the joke, literally.  It’s exhausting just to watch, but seeing the stagehands at work adds yet another layer of meta to the drama.

I can’t say that Noises Off is particularly relevant today—the closest the story gets to gloom and financial doom is two characters evading Brittain’s Inland Tax Revenue in Nothing On—but who cares. It’s hysterical and smart. And there is one other quote from the script, one that might be comforting to recall when life goes from wacky to worse: “If we can just get through the play once tonight – for doors and sardines. That’s what it’s all about, doors and sardines. Getting on, getting off. Getting the sardines on, getting the sardines off. That’s farce. That’s the theatre. That’s life.”

A Noise Within has extended their production of Noises Off with eight performances February 5 – 14.