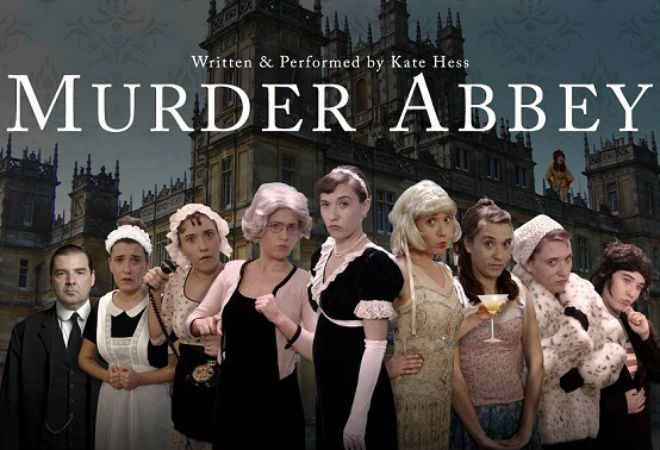 If you’re a fan of Downton Abbey or any other of the many (many!) period dramas that seem to be Britain’s main cultural export these days, Murder Abbey is the antidote. Set in the Roaring Twenties on an English estate, it’s comedian Kate Hess’s one-woman spoof show. The stage is sparsely decorated, with only a table and an old-timey phone, but the high-speed lampooning of British period dramas has a murder plot straight out of an Agatha Christie novel. Murder Abbey, directed by Andrew Secunda, finishes its run at Upright Citizens Brigade this Friday (January 31).

Playing every role, Hess takes the audience on a satirical tour of Masterpiece Theatre stereotypes: There’s the nosy kitchen maid whose cockney accent makes her terrified of losing a job that requires “total celibacy” and pays “twelve pound a year” and the wealthy femme fatale so enamored of her genetic superiority that she valiantly ignores seizures that leave her writhing on the floor (she has been diagnosed with epilepsy but prefers to think of her condition as a form of sneezing). Hess’s take on the independently wealthy American dowager (think Kathy Bates in Titanic) with a brash attitude (“I like to tell strangers intimate details about myself on first meeting, because that’s what we Americans do”) is an excellent parody of the archetypal American character that populates European culture. Naturally, she wears a wacky headpiece and stashes a pair of guns in her fur coat.

What makes it all work is the precision skewering of genre conventions evident in each dropped H. Murder Abbey is not only a parody of Downton Abbey; it also functions as an intelligent deconstruction of narrative stereotypes in media. First and foremost, however, it’s funny. And in true Agatha Christie fashion, there’s a surprise ending.

What: Murder Abbey starring Kate Hess
Where: The Fountain Theatre
When: January 31