Home Music The Next Stage 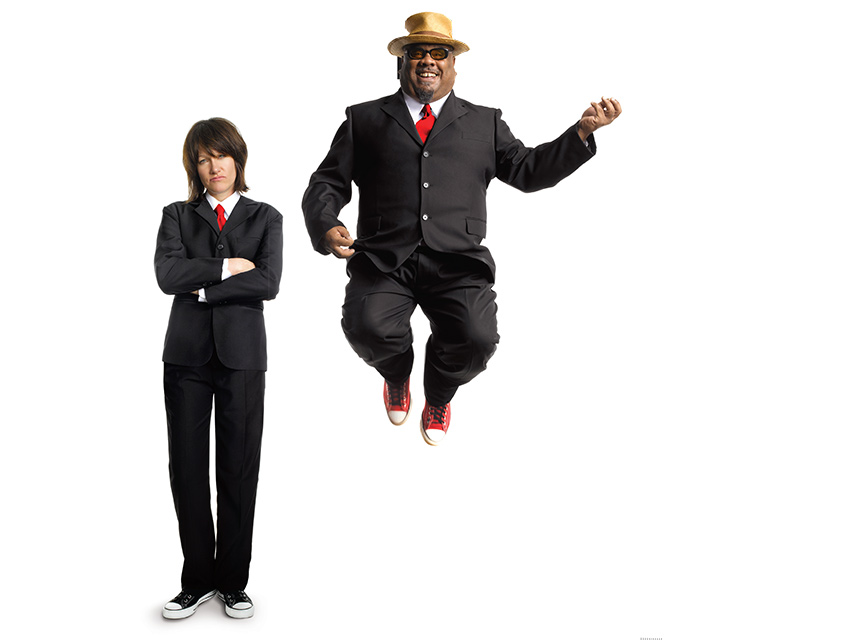 They were a really big rubber ducky floating in a Highland Park backyard blowup pool. The band the Negro Problem had pull among indie rockers and smarty-pants popsters. They had worked their way up from KXLU to KCRW; they could totally hold down a monthlong residency at Spaceland. Singer Stew, in his faux-leopard-print hat and robe, and bassist Heidi Rodewald, in her thrift store dress and boots, turned heads when they entered a restaurant. And that, it seemed, was as good as it was going to get.

The Negro Problem had been around for nine years, and many fans undoubtedly liked them because they weren’t stars. They just kept reliably cranking out well-crafted tunes in which L.A. loomed so large as a reference and inspiration, it was practically a character. They had a following under lock and key, and then they left it all behind. After Stew moved to Berlin in 2006 (he’d lived there before, in the 1980s), he and Rodewald landed in New York City—where they achieved a kind of stardom. They got a residency at Joe’s Pub, a bar far pricier than the Silverlake Lounge. Then their Passing Strange, a theatrical piece written by Stew, with their music at its center, made them the toast of the Great White Way. In it actors perform chapters taken from Stew’s life as the singer watches and comments musically. The intelligentsia loved the distance he put between himself and Los Angeles, throwing Obies and then Tonys at him. The Public Theater paid their rent; The New Yorker compared Stew to Sondheim.

Their success in exile has given fans on both coasts something to feel good about. Angelenos can laugh at the New York culturati who think they’ve discovered some exotic new genius, thus launching a familiar cycle of Big Apple overkill. New Yorkers can once again feel superior to Southern Californians.

Stew is not unaware of the ironies. New Yorkers, he says, “get to compliment themselves that ‘we are smart enough to get you when they didn’t in Los Angeles.’ Much like the French must have felt about the old jazz guys playing on the Left Bank.”

And the musicians? They have a lot of fresh ironies to mull over, a good setting for music they’ll unveil when they have their big-stage homecoming March 9 at UCLA’s Royce Hall. They’ll play a new cycle of songs written about the city they left behind. It’s a return to a place they might understandably feel sold them short. Will they bring the love? Will fans find them as charming since they’ve left? It’s a complicated moment, the sort that always seems to have Stew reaching for his rhyming dictionary.

Mark “Stew” stewart was born middle class in Mid City and formed the Negro Problem in 1995. From the start the band’s sound was parti-colored pop that drew on Love and lounge sounds—along the way someone even dubbed Stew Burt Blackarach. Their debut, Post Minstrel Syndrome, was lightly psychedelic and wonderfully decorous. An album later Rodewald came aboard (a shifting cast of musicians orbits around Stew and Rodewald), and the band gradually moved in a more cabaret direction. “The live shows that they did at the time, and the way Stew owns the stage as a black man fronting a rock band doing that kind of material—that was pretty unique,” says former KCRW music director Nic Harcourt, host of Connections on KCSN. Rodewald is a white chick with a punk rock pedigree. She’s a steadying force as a musician and a ball of energy as an onstage foil, flailing long hair that contrasts with the front man’s bulwark presence.

Stew is a bunch of interesting people. There’s Stew the Enraged, firing off responses and blog posts at imagined detractors, throwing the kitchen sink at writers he thinks have done him wrong. There’s the exile who couldn’t wait to leave L.A.—“the most fearful place I’ve ever lived in,” he told Studio 360 host Kurt Andersen—a town he was born in and that he said he’s hated since he was nine years old. There’s of course the sly, unreliable narrator, a tart, droll, self-absorbed boulevardier. In performance Stew is the domed rotunda of retorts, a round black man who may not be drunk on words but whose vocabulary might not walk a straight line. And then there’s the provocateur. It starts with the name: the Negro Problem. In L.A. it was first and last a punk rock nom de guerre. Stew was telling you to put up your dukes and lay down your preconceptions. The name has brought the band threats from folks who thought they were a skinhead crew, while the music sounds like a chart topper on the Stuff White People Like Web site. When the black singer showed up for the gig, Stew would hear a lot of “you guys must be the funk band.” Such ironies keep their motor running.

After they moved to New York around 2006, that name gained added dimensions. Stew was already working on a set of songs that would tell the story of a black man pushed and pulled by both whites and blacks who think they know him before they meet him. The joys of putting a thumb in someone’s eye took a backseat to artfully examining the complexities of race. That Passing Strange came to Broadway just as Obama was winning primaries made Stew’s critique feel all the more timely.

The author Touré interviewed Stew for his recent book on the age of “postblackness.” Touré uses the term to describe a moment—the present—in which African American identity is more fluid and ambiguous than ever. Stew illustrates the point on “Black Men Ski,” from the band’s new Making It CD. He sings, “Some kids I’ll describe as friends say I am race-obsessed / The luxury of that opinion shows that you are blessed / I have poems about sunsets flowers and the rain / I’ve read them to policemen, but it was all in vain.” Preconceptions may be dangerous but also very, very funny.

What he’s obsessed with, ultimately, is defining himself, which is perhaps why he left Los Angeles. Here he’d become known as a chronicler of a little boho enclave, and it was time to shake up everyone’s expectations, including his own. In L.A., says Stew, a good turnout was assured whenever a critic wrote, “Catch them before they get signed to a major label.” The band’s following was invested in knowing them before the world did. That was problematic enough, insofar as it suggested your fans might not want you to progress. It was even worse when no major label did sign them, considering them a cult band. To cross over to a wider audience, L.A. was their subject, and it was their tormentor, too.

“L.A. is horribly personal to me,” says Rodewald. It also approximately remains home—albeit one the musicians felt they had to leave. “I like that I can stand at a red light and feel the sun on me,” Stew explains. “I can have a Zen meditative experience at a red light, which is not possible in New York. Also, no matter how New Yorkers delude themselves, they still haven’t figured out Mexican food.”

Another thing L.A. has over New York, according to Stew: the culture of the garage. He sat for months upon months in garages, passing around libations, talking out song ideas and what they’d do if they ever hit it big. He has photographs from a typical rehearsal where the crib for Stew’s baby daughter is parked beside equipment. The garage was their shelter and their cradle.

“I go back to those long afternoons in L.A. garages where you take two hours basically talking shit and warming up and, in the case of some of us, taking certain things, drinking certain things. These long afternoons you don’t have in New York. There you rehearse for two hours. Talking Heads, the Ramones—those bands wouldn’t have come out of L.A., and the Beach Boys would never have come from New York.

“What I love about the place is its sense of time—those long afternoons and those forgiving parents who will let you play in those garages,” he says. “When I was growing up, you couldn’t walk down any block without hearing a band. It was a social gathering where you just happened to have guitars.”

Here are some things success has brought the Negro Problem: In 2009, Spike Lee filmed Passing Strange, taking the band way beyond Broadway and Spaceland—to any cable system carrying the Sundance Channel. Academia has proved supportive of Stew’s ironies, too. He held a fall residency at the University of Wisconsin in Madison, and he and Rodewald gave a talk at UCLA in November. The pair discussed their relationship to L.A., sharing assorted sense memories to the accompaniment of slides of John Wooden, Tiny Naylor’s, and the Whisky. They also parlayed Sonny & Cher’s “I’ve Got You Babe.” Which indirectly points to another thing success has brought Stew and Rodewald: prurient interest in the rise and fall of their romantic relationship. In L.A. they were a couple who wrote songs together. They broke up in 2006, continuing on as two friends in a band.

Making It, their first CD since Passing Strange, is largely a look into their breakup—purportedly from both points of view, though Stew seems to have written both sides of the story (spoiler alert: he’s the victim). Rodewald says the words are Stew’s and that hearing him dissect their relationship onstage has brought out her inner Cher—she’ll cut him off to set the record straight or say it didn’t happen the way he just claimed it did. “Imagine you’re on the stage with this other person, and all the time they are lying,” she says with a small chuckle.

“He’s Mr. Singer-Songwriter, so whatever he says, people think he’s being honest in his lyrics. And I have to be on the sidelines saying, ‘Uh, that’s actually not the truth…’ He does the whiny-guy thing, and then I jump on him.” Not that it does a whole lot of good. “The audience all loves Stew,” she says, only a touch of resignation in her voice.

They have changed, and so has the place that launched them. It’s the little things that stop Stew cold, the things you only thought you could take for granted. Now when he comes back, he’s shocked at how cool taco trucks have become. “When I lived here, they were not being frequented by as many white people as they are now. They were five-foot-two norteño-music Mexican guys in cowboy hats and cowboy boots. They were short, but you didn’t fuck with them—just order your taco and shut up about it.” A town where the loncheras are postracial: You could write a song about it.