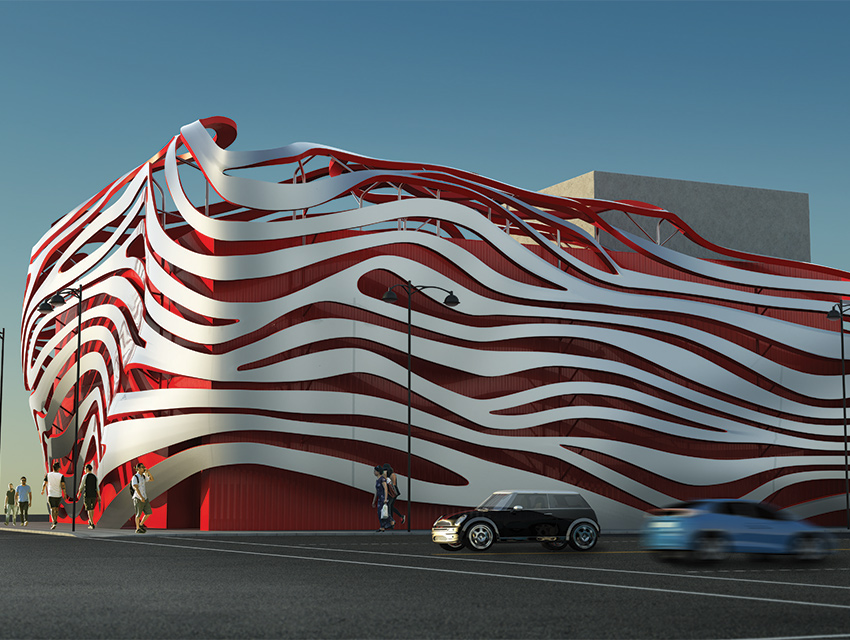 Part Frank Gehry, part Hot Wheel, the new exterior of the Petersen Automotive Museum can be startling at first. Architectural and design firm Kohn Pedersen Fox took the former department store at Fairfax and Wilshire and encased it in a corrugated red shell. Then came 35 tons of metal ribbons flowing over it like air currents in a wind tunnel. “Every one of the 308 pieces is different, and they had to fit perfectly,” says executive director Terry Karges. Launched in 1994 and closed in October 2014 for a $125 million redo, the museum has been transformed inside, too. Set pieces of historic L.A. were removed (so long, mini Bulldog Café), and the focus broadened beyond Southern California, with dozens of miles of cable linking a network of driving simulators, touch screens, and video displays in 25 galleries. Though the museum never had a Wilshire entrance, a concourse now tunnels through it to the boulevard, where, across the street, the forthcoming Academy Museum of Motion Pictures will pay tribute to another emblem of L.A. While that will be years in the making, the Petersen opens on December 8. Take it for a spin: Third floor
Adding a car elevator has opened the space to vehicles for the first time. The focus: the evolution of the automobile. First floor
Look for BMW Art Cars sporting paint jobs by the likes of Frank Stella and David Hockney. French 1930s rarities from the collection of museum chairman Peter Mullin will be here, too, along with a restaurant from the Drago brothers.