The gala honored artist Sanford Biggers as well its new building with its sparkling tile façade, exhibition spaces, an educational space, a theater, a bookstore, a terrace for special events and a café on the second floor that can seat 75. 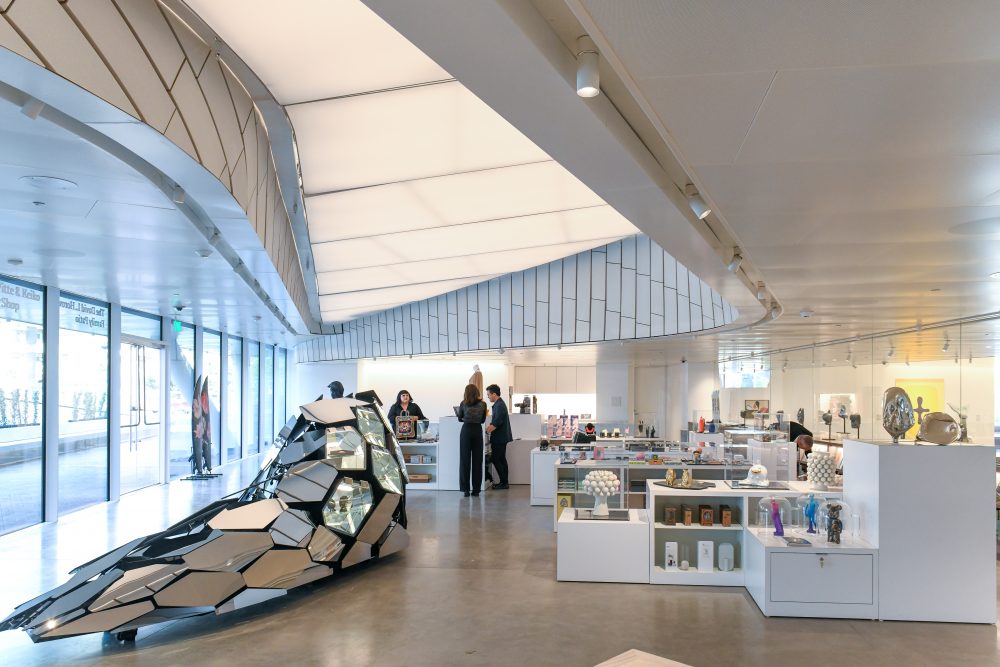 In a statement by Thom Mayne, the architect described the all new OCMA design (it was housed for 60 years in Newport Beach) as “a new model for museums based on public, urban, communal spaces with strong connections between interior and exterior. Engaging the urban realm with a public stair and ‘storefront’ galleries, the design invites visitors through sunlit atrium spaces, open galleries and an expansive sculpture terrace. The strong relationship in the building between indoor and outdoor space will encourage visitors to immerse themselves in the celebrated climate of Southern California, where light, air, and space have influenced generations of artists.”

Another reason for the new space: it’s much more convenient to art lovers all across Southern California.

The museum is part of the almost three thousand seat Segerstrom Center Theater, which was the vision of the developer of super mall South Coast Plaza, Henry Segerstrom. It’s been home to Broadway musicals, dance companies and more since 1986, and has two small accompanying theaters in the complex. Segerstrom was a big believer in supporting public arts programs.

The OCMA will open its doors to the public for the first time this weekend (October 8 and 9) with a 24 hour party that’s free, and includes music and dancing, for anyone who drops in temporarily—or those who stay up for the entire shebang. Friday at 5 p.m. will start the festivities with a celebratory drumline procession down Avenue of the Arts, then move on with tours of the museum, the rooftop dance party with deejay Jason Bentley, fireworks, art making, a movie program, a silent disco and sunrise yoga. Let’s hope there’s coffee served at the end of all that.

Spanish Sandwiches With a North African Twist Debut at Moruno