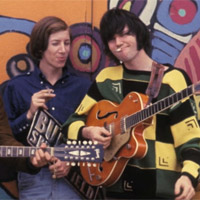 Pull out your guitar — air or otherwise — and get ready to relive those rock star dreams. The Legends of Laurel Canyon, which premieres tomorrow night on ABC7, explores the coterie of ’60s and ’70s musicians who emerged out of the creative nexus connecting the San Fernando Valley to the Sunset Strip.

The one-hour primetime special includes interviews with the late Frank Zappa’s wife, Gail, as well as Micky Dolenz, drummer and lead vocalist for The Monkees. Famed rock photographers Bobby Klein and Henry Diltz share rare photographs and footage that offers a look into the world of rock legends including The Doors, Jimi Hendrix, Frank Zappa, Joni Mitchell, and the Mamas and the Papas. Working with Harvey Kubernik, author of Canyon of Dreams: The Magic and Music of Laurel Canyon, host Tina Malave began her passion project in June 2011. “I was most taken by Frank Zappa and the impression he left on everyone,” said Malave. “It was all about creativity and – as world famous groupie and author Pamela Des Barres told me, ‘It was all about love! The canyon was thick with it!’”