Home Uncategorized The MSQ Review: American Night: The Ballad Of Juan José at... 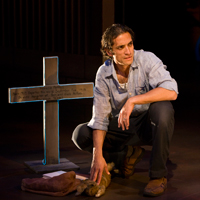 The Encyclopedia Britannica is going to cease print publishing because it can no longer compete with the online world. Imagine if they had to compete with Richard Montoya’s wild view of American history in the new play American Night, which just opened at the Kirk Douglas Theatre.

In Mr. Montoya’s play, Juan José (René Millán), an immigrant from Mexico, is desperate to become an American citizen. In the opening of the play he discusses this desire with two Mormons who offer to help him, though they are not without their own agenda nor their “non-musical” book. Juan’s citizenship test is the next day and he has to cram to be ready. He falls asleep and the bulk of the play is his dream/nightmare.

Juan’s dream functions as a history lesson on how America has treated indigenous people and immigrants. Along his way he encounters Teddy Roosevelt, Lewis & Clark, Jackie Robinson, and others. It is a wild ride through our history with a sense of humor and an agenda. Much like Dorothy in The Wizard of Oz, Juan travels down the road of history to realize that for all its flaws (past and present), he does want to call America home.

American Night has many humorous moments. But I never felt the humor was as funny as the depictions were outrageous. Mr. Montoya fills the play with moments designed to confront us, but on opening night more people were shocked by his reference to Whitney Houston than they were about how nasty we can be as people. I guess some are inured to despicable behavior and tasteless jokes unless it involves famous people.

So it was odd that I found myself emotionally vested in Juan José’s journey as the play developed. Mr. Millán deserves a ton of credit for that. He gives a passionate and committed performance from the opening scene through to the end. The entire company (which includes Mr. Montoya) is very good. When the play reaches present day and all caricatures of behavior participate in a town forum or talk show, you see how precision-like the performances are. Credit also goes to Jo Bonney for superb direction.

This production uses a lot of projections, which are something I’m getting more and more annoyed by as it strikes me as economical and not usually creative. However, Shawn Sagady’s projections strike just the right tone for American Night and really feel like they are in service of the story more than the budget.

Mr. Montoya’s agenda is clear and he is having fun playing with history through a contemporary prism. I wish I had had as much fun watching American Night as he and his company clearly are, huddling close and hanging on to Juan José’s dream.