Home Uncategorized The Most Successful Failure in the U.S. Rides a Giant Albino Rat:... 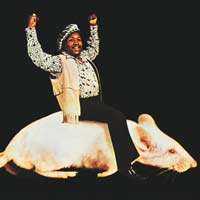 Jerry Williams Jr., the artist better known as Swamp Dogg, doesn’t give people what they want to hear, he gives them what they need. In the 1960s and ‘70s, when Swamp recorded and produced the majority of his albums—noted for their audacious, outrageous covers—his politically charged lyrics and uncensored wit were his way of attempting to change the world. The responses to his psychedelic soul music fell along a broad spectrum. On one side was a small group of core devotees; on the other, a wall of rejection and anger. He even earned a spot on Richard Nixon’s “enemies list” for being associated with Jane Fonda and possibly for his song titled “God Bless America for What.”

“I found out some people rejected my message,” Swamp said. “They were afraid of it, but I went on my way and continued doing what I do. That’s what I’m doing now.”

Swamp has put out almost 20 records since the ’50s, when he was still Jerry Williams. His most successful hit, “Don’t Take Her (She’s All I’ve Got),” reached the top five twice in the ’60s and again in the ’70s, and his 1970 album Total Destruction to Your Mind became certified gold—22 years later. But most people have never heard of the idiosyncratic, soul-crooning persona. Maybe that’s why he calls himself the “most successful failure in the United States.” Now, at 71 years old, his 1970s albums Total Destruction to Your Mind, Rat On!, and Gag a Maggot, have been reissued and he’ll be playing a rare show at the Echo this Saturday night. Here are five things you should know about Swamp.

1. See Picture Above
“I have two things that I’m proud of, that maybe I shouldn’t be proud of,” Swamp says. “One of them is making Richard Nixon’s ‘enemies list’ and the other is having my Rat On! album called the worst album cover in the world. That has kept me alive!”

2. He’s the original DOGG
Let it be known that Swamp Dogg is the original D-O-double G. He coined the name before the-man-formerly-known-as-Snoop Dogg was even born. “One of my happiest days was when Snoop Dogg changed his name to Lion or whatever.” The Swamp will forever own and stay true to the Dogg.

3. The Swamp Stomp
“It ain’t nothing but James Brown turned backwards,” Swamp says. “When the music is good, it makes me wanna dance. But I’m not gonna try to go into no Fred Astaire shit and dance on the ceiling. It’s so much not a dance that you would look at me and say, ‘What the fuck is he doing?’” He’s referring to his infamous Swamp Stomp, a “dance” that can only be seen, not described.

4. His Mom is Opening
Her name is Vera Lee and she’s 93. Swamp says his mother, who was a member of a Top 40 cover band, was his biggest musical inspiration and is now his go-to opener. “I have fun being able to call her and say, ‘Hey we’re doing a gig.’ That makes me feel good, and hopefully I might have a couple of extra points at heaven’s gates. I’m picking up points wherever I can.”

5. “My Music So Funky It’ll Gag a Maggot”
“But really, won’t nothing gag a maggot except borax,” says Swamp.