Home TV The Most Memorable Moments from Last Night’s Oscars 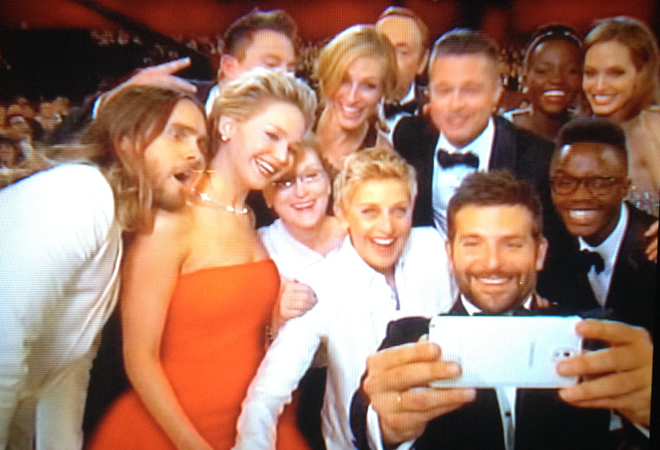 The 2014 Oscars telecast is over. The tears have been dried, the bellies have been un-girdled, and the revelry has—in most cases—ended. It’s time to take stock of the most memorable moments at the Academy Awards.

10. Presenter Kevin Spacey greeted the audience in the South Carolina accent he adopts as Frank Underwood on House of Cards. We loved it more than sharks love blood.

9. Karen O teamed up with Ezra Koenig, the lead singer of Vampire Weekend, to perform “The Moon Song,” a sweet and lilting tune from Her, which was directed by her former beau Spike Jonze. Also, Koenig matched his socks to her dress. How’s that for classy?

8. It was kinda cute when host Ellen DeGeneres called to order a pizza during the middle of the show, and it was still tolerable when she went through the audience asking celebs for tips to pay the delivery guy. But by the time she was passing out slices, the bit (which was an incredible promo for Big Mama’s & Papa’s Pizzeria on Sunset Blvd. near Fairfax) was like #beatingadeadhorse. We get it. After Seth MacFarlane turned up the dial on the crassness scale at last year’s show, the Academy rebounded with the most milquetoast choice. It’s hard to find the perfect balance between obnoxious and insulting, but Tina Fey and Amy Poehler prove that it can be done. Would you cook a meal with no salt, pepper, or spices? Of course not. That’s what watching DeGeneres host the Oscars was like.

7. This year, the show’s producers were far less aggressive about playing award winners offstage. Thank goodness. If the telecast feels long—and it usually does—it’s not because of the speeches; it’s because of the bloated montages (action heroes!) and lengthy introductions to categories.

5. Say farewell to the selfie. Ellen DeGeneres killed it. She did it tonight at 7:04 p.m. PST when she invited Jared Leto, Bradley Cooper, Meryl Streep, Lupita Nyong’o, Jennifer Lawrence, Kevin Spacey, Angelina Jolie, and Brad Pitt to pile in for a snapshot. It quickly hit more than two million retweets and crashed Twitter for about 20 minutes. When your grandchildren ask about the selfie, remember where you were at this historic moment.

4. After the In Memoriam montage and Bette Midler’s rendition of “Wind Beneath My Wings,” Sarah Jones, the camera assistant who was killed last week in Georgia while working on the set of the Gregg Allman biopic Midnight Rider, received a small tribute with a lower-third title honoring her life.

3. After the names of the nominees for best cinematography had been read, Bill Murray, who was presenting the award with Amy Adams, said, “Oh, and we forgot one: Harold Ramis for Caddyshack, Ghostbusters, and Groundhog Day.” As impromptu tributes go, it was short but incredibly sweet.

2. When 20 Feet from Stardom won the best documentary award, Darlene Love sang her acceptance speech and nearly blew the roof of the place. Good luck trying to get the orchestra to play her offstage! She earned a standing ovation starting with Bill Murray, who hopped out of his seat.

1. Jared Leto was thoughtful, articulate, and generous when accepting his prize but if there were an award for best speech, it would go to Lupita Nyong’o. Like Leto she didn’t rely on notes or catch phrases, she was genuine, and her words were outward-looking, directed at the would-be actors and artists of the world. “It doesn’t escape me that so much joy in my life,” she said, “is due to so much pain in someone else’s.” It was hard not to get misty as Nyong’o thanked her nearest and dearest, but it was almost impossible not to cheer when she closed with, “No matter where you’re from, your dreams are valid.”