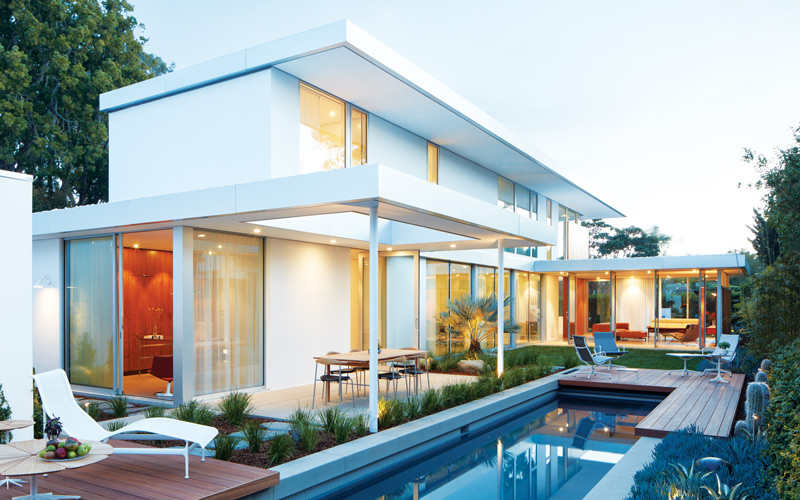 Owners of midcentury modern homes tend to be acolytes of-or at least familiar with- the works of such L.A. icons as Rudolph Schindler, Richard Neutra, John Lautner, and Peirre Koenig. For Eline Hissink, the names didn’t register a blip. But she knew what she wanted for the house she and her husband, Scott Yasharian, were building in Santa Monica: simplicity, functionality, durability, and most of all, an absence of clutter. That checklist, she discovered, perfectly defined midcentury architecture.

Culver City based architects Brett Woods and Joseph Dangaran helped the Dutch-born Hissink realize the trill of flinging open floor-length glass doors to the earth and sky. Along with other modernist touches, the cactus garden was extended into the house, which was completed in 2015, and an opening was left in the patio overhang for the sun to shine through. The challenge for Hissink was to furnish the house in the spirit of its roots, and she found herself drawn to Danish midcentury décor. The chairs of Finn Juhl and Hans Wegner. Lights by Arne Jacobsen, Verner Panton and Poul Henningse. Chairs, desks, and pendant lights by the team of Prepen Fabricus and Jorgen Kastholm, who became an obsession. Little from the pair’s body of work is still produced, so she contracted with a small Danish manufacturer to craft a desk and “Scimitar” chair from the original blueprints.

One time fashion designer, Hissink worked for both John Galliano and Alexander McQueen at key points in their careers. The craftsmanship in haute couture had awed her then, and she applied the same sensibilities to customize her home’s interior. For the living room sofa, by Swiss designer Hannes Wettstein, she selected a leather in Belgium valued for its quality and resistance to wear and had the piece assembled in Denmark. She also deduced that with proper care-a beeswax coating for the leather and regular oiling of the teak arms-the Hans Wegner chairs she had chosen for the dining table could migrate outside.

Hissink since formed her own interior design company, Midcentury Modern LA, which hews to a minimalist philosophy. “You only need to have what you need and you don’t need more,” she says, borrowing and aphorism from Danish furniture designer Poul Kjaerholm. The emphasis on the few allows her to savor each piece. Inside her sleek white Bulthaup kitchen, she strokes a Florence Knoll table of Carrara marble, delighting in its cool feel. “The natural pattern in the marble almost comes alive as you look at it,” says Hissink.

Perhaps the greatest compliment regarding her work came from a friend of the couple’s nine-year-old-son, Aiden. “As soon as he walked in he looked around for a second and said, ‘Wow, look at this-just like Grandpa’s house!’”