Home Uncategorized The Master: 10 Things We Think We Now Know About Scientology From... 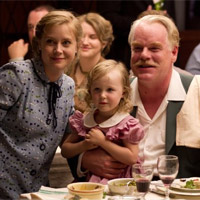 A lot of the buzz surrounding P.T. Anderson’s latest epic, The Master, which hits theaters today, has been around the plot’s supposed parallel to the creation of Scientology. We don’t know much about Scientology aside from the fact that when you join, they pair you with a robo-spouse and we’re pretty sure you get your own 747. Also, the organization owns acres of prime L.A. real estate. But after watching the two-and-a-half-hour flick, which stars Phillip Seymour Hoffman as Lancaster Dodd, the charismatic leader—or “Master” as it were—of the pseudo-scientific-religious group, The Cause, we think we’ve learned a few things.