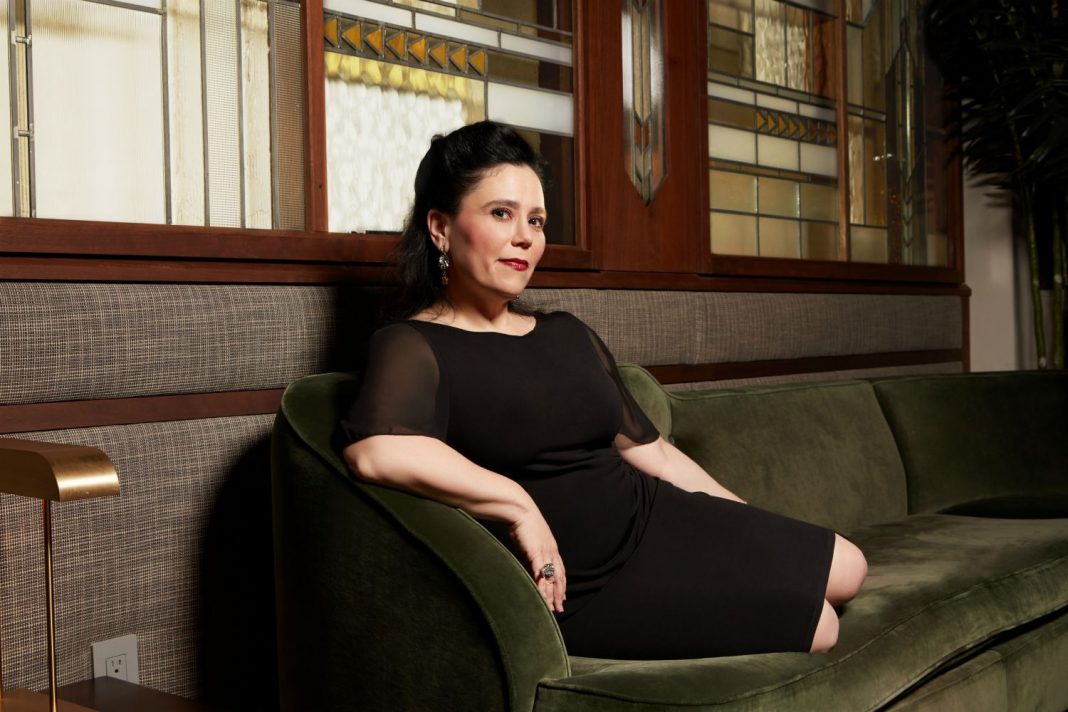 When actress-writer Alex Borstein took home an Emmy in 2019 for her fabulously funny portrayal of Midge Maisel’s scrappy manager Susie Myerson on Amazon’s The Marvelous Mrs. Maisel, she famously encouraged women to “step out of line.”

The 49-year-old actress is nominated again this year for season three of the much-binged show, and now has another, very different, project under her belt: a new documentary called Bombardier Blood, her first foray as an executive producer on a full-length doc. The film is about mountaineer Chris Bombardier, a hemophiliac who’s made it his mission to climb the Seven Summits of the world. The movie documents his trip to Nepal, where we watch the 32-year-old tenaciously—and carefully—scale Everest, as his wife worries herself sick. But the biggest part of Bombardier’s mission is to bring awareness to the disease that afflicts one in 10,000 American births—including Borstein herself.

We spoke to Borstein via Zoom about her Emmy nomination and new role as documentary EP.

Congrats on your Emmy nomination this year.

Thanks! Of course, Emmys are going to be all virtual, they’re trying to figure out a special home Zoom thing. I really don’t know how it will work. I, for one, am happy not to spend a night in high heels. But having been there, it is definitely cool and other worldly and surreal. You’re in a great mood—but your feet are not.

How did you become an executive producer of Bombardier Blood?

Well, I am a carrier of hemophilia. I’m called a low-level symptomatic carrier; I have issues from time to time. My brother is a hemophiliac, my uncle; my mother is a carrier. My son [who is 12] isn’t, but my daughter [8] is; they characterize her symptoms as low level. It’s a family business for us. I met the director Patrick Lynch, also a hemophiliac, through various hemophilia organizations. He really brought this film to life. He asked if I would come into this space I had very little to do with the making of this baby. It’s all Chris and Patrick. Where I came in, was to get attention, to get people to see it. It’s entertaining as well as informative.

It’s pretty scary watching a hemophiliac climbing Everest. I was a nervous wreck, even knowing he survives.

It’s painful at times, but so much more importantly, informative. It’s really about three people: there’s Chris, his wife, and the mountain, who’s like a character as well. I’m so happy people will be able to see it; it’s a really important issue. And it’s on iTunes, which is my opinion, is the greatest. I’m so happy with all the streaming. If it wasn’t for streaming in the last five months, I’d be in jail because I would have killed my children! It’s such a great time to have something like this coming out now; people are desperate for new content.

What have you been watching?

Well, I’d fallen out for so long. I’ve been living abroad in in Spain, I forgot about TV for a while. I just finished the last season of Better Call Saul. Just saw Succession—it’s Game of Thrones in suits, people vying for the throne, familial relationships. I’m in New York for six months, while we shoot [Maisel]. When I’m not shooting, I come to Spain.

Why not Spain? It’s beautiful and has a great quality of life: it’s a calm, easy, happy place to live. People are, for the most part, happy and joyful. You can’t squelch it. The U.S. right now does not look good from here. In fact, it looks pretty horrendous from here. When I was living in Los Angeles, there were all these big fires. Now I’m hearing about U.S. Postal Service going under. It’s insane. All we can do is put our faces in our laptops and watch good content. Read a good book. Watch a good doc.

How are your kids doing during the pandemic?

I’m homeschooling my kids. We were locked down from March to late June. I’m lucky, my kids are like indoor cats. They were pretty happy with just having screen time. It was interesting to get a perspective on what my children learn and how. You can absolutely see your children’s strengths and weaknesses.

How do you think Bombardier Blood will be received? There have been a number of climbing documentaries, but there really hasn’t been anything like this.

We held an early screening in New York, and some of my Marvelous Mrs. Maisel castmates came. That was incredible, seeing people’s reaction to the film, how it played, and people being made aware of hemophilia. I talked to Patrick about cuts and changes while he was editing, but the result is all their hard work and diligence. My title of EP is just to get it out there. As hard as it to live with a bleeding disorder in the U.S., people in other places, some remote, are so far away from treatments and treatment centers. Twenty percent of the film’s proceeds go to Save One Life, all over the globe.

Speaking of The Marvelous Mrs. Maisel—which has 20 Emmy nominations this year, more than any other show besides Watchmen—where is season four in terms of being completed? People are starting to get a little nuts anticipating it.

With season four, we are in a world of “we don’t know.” We don’t know when we’ll be able to give the people what they want. My father is especially sad. Everyone really wants to finish it up and get it out there. But we want to do it safely—for everyone. We’re dying to finish up. But who knows? It’s just all wait and see.

Below see an exclusive clip from the film …

RELATED: Kerry Washington and Other Nominees React to Their Emmy Nods