Home Uncategorized The Man Behind the Curtain: A Short Guide to The Sonic Art... 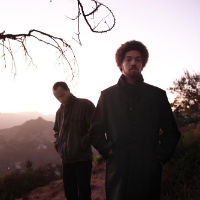 Brian Joseph Burton, better known by his artistic nom de guerre Danger Mouse, is one of the most enigmatic figures in pop culture. Since his breakthrough in 2004 with The Grey Album, a mashup of Jay Z’s The Black Album and The Beatles’ “white album” that landed the producer in hot water with EMI, Burton has been a source of some of the new millennium’s most innovative popular music. He’s one of the rare musicians who’s capable of merging great artistic vision with a commercially successful product. He’s also secretive when it comes to his work and rarely talks to the press. Grunge icon Kurt Cobain once said that his ideal as an artist was to enjoy “the adoration of John Lennon with the anonymity of Ringo Starr.” If anyone top musician has achieved this lofty goal, it’s Burton who’s never the front man but is always in complete control behind the scenes.

With January’s release of After the Disco—the second album from Broken Bells, Burton’s collaboration with Shins guitarist and singer James Mercer—the musical chameleon is gearing up for a tour that includes a stop at Coachella in April. Before you drive out to Indio, brush up on your Danger Mouse. We’ve put together a list of our favorites from Burton’s many projects since The Grey Album.

Gorillaz – Demon Days
What: In 2005, Danger Mouse produced the second album by Gorillaz, the fictional cartoon rock band masterminded by ’90s Britpop icon Damon Albarn and comic book artist Jamie Hewlett, co-creator of Tank Girl.
Keep listening for: We don’t know who came up with the idea but having Dennis Hopper read an unsettling story about a utopian community on a volcanic slope invaded by outsiders on the track “Fire Coming Out of the Monkey’s Head” was a stroke of genius.

Danger Doom – The Mouse and the Mask
What: Under the moniker Danger Doom, Danger Mouse collaborated with British-born rapper MF Doom, known for his supervillain performing persona, on two albums in the mid-2000s.
Keep listening for: MF Doom’s skills as a rapper are undeniable, but the beats and strange samples that reference artists throughout the history of music, is what really stays with you. Danger Doom is an encyclopedia of sound for music archivists.

Danger Mouse & Sparklehorse – Dark Night of the Soul
What: Danger Mouse and wrote and produced Dark Night of the Soul with Sparklehorse’s Mark Linkous, who committed suicide only a few months before the album’s 2010 release.
Keep listening for: This was Linkous’s last completed album, and his eerie, fragile voice haunts this dreamy musical pearl. The album was set to be released as an insert in a limited-edition 2009 book of photographs by filmmaker David Lynch, who crafted a visual narrative around the music. Due to a legal dispute with EMI, the book was initially made available for sale, packaged with a blank CD-R instead of the contested album—the implication being that an interested listener could pirate the album.

Beck – Modern Guilt
What: In 2008, Danger Mouse teamed up with L.A.’s post-modern prince of weird pop for Modern Guilt, Beck’s eleventh studio album.
Keep listening for: Beck is the type of artist who will record a 15-minute funk track just for the hell of it. Danger Mouse seems uniquely capable of restraining the artist’s more esoteric impulses in favor of tight, sleek retro-esque production that at times recalls the anti-grunge rocker in the early days of Beck’s career. The dark and melancholy lyrics offer a stark contrast to the catchy tunes.