Home Uncategorized The Man Behind Janis Joplin — and Patsy Cline and Mike Tyson... 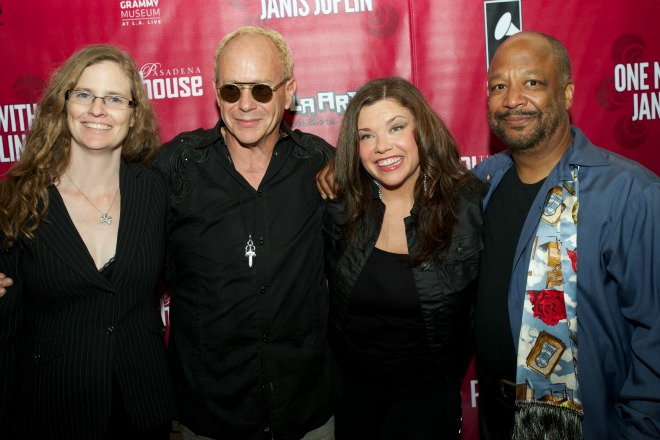 But his tribute to bluesy rocker Janis Joplin, known for powerhouse lungs and a heroin habit that ended her life at 27, may be his most personal to date. One Night with Janis Joplin runs at the Pasadena Playhouse through April 21. He discusses working with the Joplins, discovering Janis’ softer side, and what he learned from Mike Tyson.

Why was this show personal for you?
When I was five years old, the second album I ever heard was Janis Joplin’s Cheap Thrills and the third album was the Gershwins’ Porgy and Bess. “Spirit in the Dark” [which closes out act one] was one of the songs that I listened to all the time as a kid. I remember being in Woolworth’s and buying that album. I played that song over and over. Janis and I are kind of intertwined throughout the show.

So how did you get involved with the project?
I had a meeting about two and a half years ago with the Joplin family. They had wanted to do a new show about Janis. It was going to be twenty minutes and turned into a two-and-a-half hour meeting. One of the things they talked about was cleaning day in the Joplin house. Dorothy Joplin had wanted to be a Broadway singer. Circumstances happened and she stayed in Port Arthur, Texas and had a family. On cleaning day they would play Broadway show tunes, and each Saturday was a different cast album. They listened to West Side Story, My Fair Lady—and Porgy and Bess. Janis played “Summertime” over and over, and it went on to become one of her greatest hits.

What is the structure of the show?
The story is told through Janis’ eyes onstage in concert where she talks about her influences. Janis says that she’s going to record one of these songs next week, and it’s the song that she never got to record. She feels compelled to tell the audience who she is, how she got here, answer misperceptions. As we get close to the end of the concert, you get the sense that Janis has that intuition that she may not be around much longer. The show is the portrait of an artist.

You also invented this character, the Blues Singer, as an amalgamation of Odetta, Bessie Smith, Nina Simone, and Aretha Franklin. What was the idea behind that?
I created the Blues Singer because I wanted to be able to portray all these influences and show how they merged into Joplin’s consciousness. I didn’t want a bunch of impersonations. The Blues Singer also serves as Janis’ alter ego. She’s lit in a way that she serves as a memory. She is part of a tapestry that made up the soul spirit of Janis Joplin. At the end of act one is a concert between Aretha and Janis, “Spirit in the Dark.” It blows the roof off every night.

How did you go about casting the leads, Mary Bridget Davies and Sabrina Elayne Carten?
Sabrina has been an opera singer most of her life. She walked into the audition in New York. All these girls auditioning were all dressed up. Sabrina was dressed lovely but very simply. She opened her mouth and by the fourth note I knew I had found the [Blues Singer]. I had known of Mary. She wasn’t available when we did the Portland production. She actually sent me an email asking me if it would be ok if she auditioned for the Cleveland/DC productions, which shows you how humble she is. I was like, absolutely! In casting Janis, if people come in with feathers in their hair, you know they’re not going to be quite what you’re looking for. She walked in the room, she simply opened her mouth, and blew everyone away. Talent wins. You can dress up and wear an Armani suit to auditions, but if you don’t have talent, none of it counts. Both of those ladies are tornadoes of talent. Janis is in Mary’s DNA.

What’s the myth of Janis Joplin versus the reality?
People think she was just this wild woman who came out onstage and sang her butt off, drank heavily, lived hard, and died. A lot of people think she committed suicide. She didn’t. She really loved life. She became famous when it wasn’t easy to become famous. She said she was just “a white chick singing the blues.” When she writes the letters home, you can tell that she’s sort of overwhelmed by it all at times and loving the ride. I found her to be an ordinary girl in extraordinary circumstances. She talked about the complexities of fame, she talked about being lonely on the road. I think that she really wanted to have a family and a home life and kids. She wanted it all. She was bright, articulate, funny, spiritual. She designed her own stage clothes. The remarkable thing about her is that she told the truth one hundred percent of the time whether you liked it or not.

How did you get involved with Mike Tyson?
I was in Vegas doing another job and the producer was Mike’s producer. He asked if I wanted to come meet with Mike one day. He’s a terrific man; his family is terrific. I directed the production at the MGM Grand in Las Vegas. It was really a remarkable time.

Both Janis Joplin and Mike Tyson’s reputations precede them. Did that affect your approach to their shows? Is it different working with a living legend?
It’s really not. You get to know the artist, what makes them breathe, find out their history. Whether they’re living or deceased, you still have to honor the integrity of the individual you’re working with. Reputations are other people’s opinions. They’re not necessarily facts. In the ’90s, when I worked with both Hepburns [Audrey and Katharine], I learned a lot about authenticity. They simply were who they were. Mike is a very kind man and he’s wickedly funny. You don’t survive everything Mike Tyson has survived without being smart, funny, and kind. We all have a chance to survive our past and move forward in a positive manner.

And before Mike Tyson, there was Pope Benedict. What was that like?
I directed the papal mass and concert at St. Joseph’s Seminary in Yonkers [in 2008]. We put together a four-hour concert in front of 100,000 people. Whether you’re Catholic, when you’re in the presence of the Holy Father it’s a remarkable experience. I’ve worked with a lot of stars and been standing backstage as they walk onstage. The sound that comes from an audience when that kind of person is present is something you never forget. And the sound when the Pope entered the stage was that sound times one hundred. He’s the ultimate rock star.

Are you expecting Pope Francis to call you up anytime soon?
I’m never surprised when the phone rings and someone’s on the line offering me another amazing opportunity. You never know.