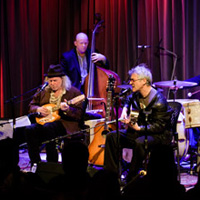 For their latest intimate performance in the “An Evening With” series, the Grammy Museum downtown welcomed a new band made up of four guys who are anything but new to the music industry. The Majestic Silver Strings is a guitarist supergroup in that it brings together a varying collection of highly regarded players: Americana-roots producer-songwriter Buddy Miller, jazz guitarist Bill Frisell, rock experimentalist Marc Ribot and pedal steel pro Greg Leisz. The group has a new album that reveals their take on old country songs and a couple of originals tunes, all with first-rate guest vocalists (Emmylou Harris, Patti Griffin, Lee Ann Womack, to name a few). The museum’s Executive Director Bob Santelli kicked off the night with a warning:  this “Evening With” would have more music, and less talking, than usual. The reason: the Majestics prefer playing to speechifying. The announcement was greeted warmly by the packed audience of L.A. music lovers and icons (like Victoria Williams and Exene Cervenka). But the series is built around asking a few questions, so Santelli gave it his best shot. How did the band come to be?, he asked. Miller, with his long gray hair and signature bowler hat, explained sheepishly that there is no profound answer. “Bill and I had several conversations about messing up some old country songs,” he said of Frisell. Then, casting a fond eye at Ribot and Leisz, he added, “These are some of my favorite players, gonna watch what they do and steal it.”

The foursome played imaginative new arrangements of standards by Roger Miller, Lefty Frizzell and Eddy Arnold. Some of the songs started off as dissonant layering of four instruments that eventually came together in a new definition of the wall of sound. Other traditional cowboy laments were beautiful, plaintive waltzes that showed off the virtuosity and talent of each player. The sum of their parts is a distinctive take on Americana worth checking out.

The album is available now, and with these guys’ schedules, (it took almost a year to find the time to record together), a tour sounds unlikely. Miller joked that this was just the fourth concert the group had performed, and it would have been the third but for a double bill one night. Each man stressed how lucky they were to be together, playing music that they love, music that doesn’t fall into any neat, defined category. As Buddy said at one point, when a reference was made to the Grand Ole Opry, “The Opry’s this thing in Nashville, Tennessee, that we will never be on.” We just hope they will all be together again very soon on any stage.