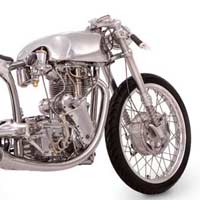 It’s hard to decide on a title for Ian Barry. After walking through his studio, an industrial menagerie of slick metal slabs and other raw materials, a few words pop to mind: engineer, mechanic, artist, sculptor, scientist of metal, visionary. The 40-year-old who co-founded Falcon Motorcycles in 2009 made his name customizing British bikes, but now builds them from scratch. He takes his work seriously. Excluding the tires, carburetor, and engine, Barry creates every single part on his own; in the past, he has even fashioned the tools needed to form certain pieces.

Barry is working on the “Falcon Series” collection, the goal of which is to develop ten bikes in ten years. He has completed three: the Kestrel in 2010, the Black in 2011, and the White in 2013. Along with mixed media pieces, the White will be on display at the Michael Kohn Gallery for The White, The Black, The Kestral, an exhibition that opens July 27 and runs through August 31.

Each bike in the Falcon Series is named after a species of the bird. “There are obviously aspirational qualities of the falcon in being the fastest creature on the planet,” Barry says. “There’s also something that has been perfected by nature over time. But most compelling to me is that they can’t be tamed. You can’t really control them. In a way you have to choose each other. I like that relationship.”

Every Falcon begins with the engine. “I make the engines the focus because in and of themselves those are symbolic and they have a rhetorical quality,” he says. “There was a time when the engines had a historical context but that really became irrelevant. It’s more about what it can do. The engine isn’t a static material. It’s about propulsion and potential.”

The White boasts a Velocette racing engine, the Kestrel a modified 1970 Triumph Bonneville, and the Black a 1952 Vincent Black Shadow—each of which is rare and iconic. From there, Barry lets his mind, and his hands, invent the rest.

The final product is a mind-bending hybrid of machinery and artistry. I’m the last person to be impressed by the aesthetics of a motorcycle, but I’m completely enamored with the Kestrel. My eyes start at the bottom and latch onto each individual element for minutes at a time. It looks as though it’s made of liquid metal; maybe the mercury-like material will swallow my fingers if I sneak a touch. Although the bike is unmoving, you can feel its potential power. “I look at these bikes,” Barry says, “and I think: It’s the only way to describe flight on the ground.”