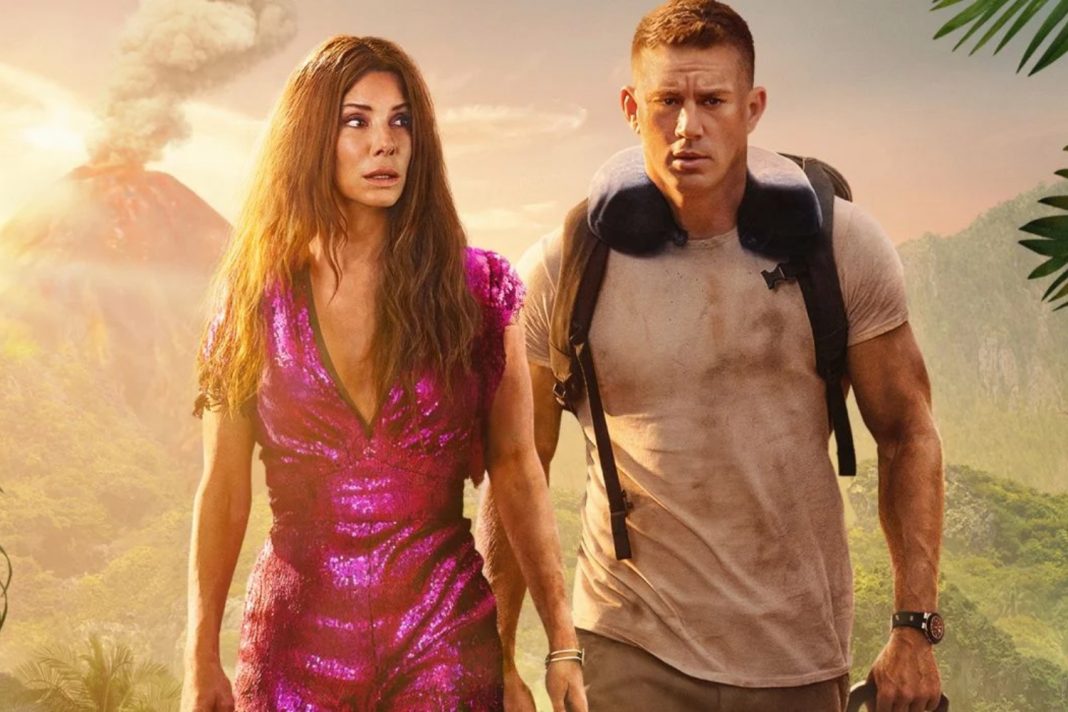 I’ve always said that adventure is the hardest genre to get right, because you have to strike a very precise tone and find the perfect balance of danger, humor, and if you’re lucky, a little romance. Google “adventure movies” and you’ll find that no one can even agree on what an adventure movie is these days. For the record, the Indiana Jones movies are adventure movies, but the Spider-Man movies are not. To me, those are action movies. Sure, there are adventures in the Spider-Man movies, just as there can be plenty of action in adventure movies, but there is a distinction between the two genres, and like pornography back in the ‘60s, you just know it when you see it, right?

The Lost City, the rollicking new movie starring Sandra Bullock and Channing Tatum, is an adventure movie. OK, maybe it’s an adventure-romance, but the point is that the word “adventure” comes first. It’s not an action-adventure movie. The film hails from siblings Aaron and Adam Nee, who were an unlikely but fitting choice for the project, seeing as their last film, the little-seen 2015 indie Band of Robbers, was based on Mark Twain’s books The Adventures of Tom Sawyer and The Adventures of Huckleberry Finn. Go to IMDb right now and if you look up Band of Robbers, the first genre listed is “adventure,” which is fairly rare when you really think about it. So they were an inspired pick from Paramount.

Anyway, the Nee brothers have a much bigger budget this time around, not to mention much bigger stars in front of the camera, and that’s what these movies ultimately live or die on — their stars and the chemistry between them. That’s why The Lost City is the rare adventure movie that’s actually worth watching, even if it’s far from perfect.

Bullock plays Loretta Sage, a famous romance novelist whose books feature a handsome cover model named Alan, who embodies Dash, her beloved, Fabio-like literary hero. While Loretta’s audience surely reads her books for the naughty parts, judging from an audience Q&A glimpsed in the film, Loretta herself is too busy writing those books to have much of a sex life of her own. What makes her tick is the archaeological research that surrounds the blue prose. Like when you read The DaVinci Code and wished that author Dan Brown would just shut up about European art and get to the next big set piece already.

Loretta’s expertise in such scholarly matters makes her extremely valuable to Abigail Fairfax (Daniel Radcliffe), the eccentrically named, fabulously rich, treasure-hunting twerp who kidnaps Loretta in the middle of her Lost City book tour because he thinks she can help him locate the real Lost City. Thus, Tatum’s Alan sets out to rescue her despite having no survival skills to speak of, though fortunately, he’s helped along the way by Loretta’s determined publicist, Beth (Da’Vine Joy Randolph), her new social media manager (Patti Harrison), and a former Navy SEAL turned CIA operative named Jack Trainer, played by the always-game Brad Pitt.

You know where this is heading: Will Alan and Loretta save each other and fall in love as they trek through the jungle together?

From its very first moments, The Lost City announces itself as a fun studio movie that everyone should really be able to enjoy in one way or another. The first 30 minutes are pretty great, and then, just when that first act ends and you expect it to sag a bit, the film gets a super-charged charisma boost from Brad Pitt — a pretty pleasant surprise for any movie fan. This is a really fun role for him and you can tell he’s enjoying himself. Oscar winners Pitt and Bullock traded favors with each other, as he plays a supporting role here, while she’ll soon be seen as his handler in Sony’s Bullet Train. Their own chemistry nearly threatens to upstage that which Bullock had been building with Tatum, but after serving his purpose as the stick of dynamite this movie needed, Pitt exits after 25 minutes or so before he can wear out his welcome. A lesser movie might’ve milked his time on set for all it was worth but the Nee brothers are smart enough to know just how to use him.

The directors quickly introduce another memorable supporting character in the form of a smooth-talking cargo plane pilot (Oscar Nunez, The Office) who teams up with Beth to help her find Loretta, promising not to murder her along the way. The two of them make for a fun supporting duo.

But here’s where this movie stumbles. We get the Pitt boost around 25 minutes in, and the Nunez boost around 50 minutes in, but there’s no boost at the 75-minute mark, so for 20 minutes, The Lost City kind of just goes through the motions and starts to drag before wrapping up in fairly satisfying fashion. That’s a pacing issue, and pacing is fairly essential in an adventure movie like this. It’ll sound like a nitpick, but this movie needed a 10-minute trim, as that kind of modest edit can make a world of difference in terms of keeping an audience engaged. Once you’ve lost ’em, it’s hard to get ’em back. Yet the film does right itself.

A big part of that is the supporting cast. They’re the secret sauce of this movie, as everyone just shows up to hit a single and get on base, so to speak. That includes Randolph, Nunez and rising star Harrison, as well as SNL’s Bowen Yang, who manages to score a few laughs in just a few minutes of screen time. There’s also some bit players whose facial reactions slayed me, and really show the Nee brothers’ knack for comedy, because it’s little flourishes like those that can produce big laughs.

If there’s any weak link here — I hate to say it — it’s Radcliffe, who has just never been for me outside of his iconic Harry Potter role. This is yet another movie in which I just don’t care for him, as he’s not menacing in the slightest. He needs to go find a real sick, twisted role like Elijah Wood’s in Sin City and play a real scuzzy creep, because every time I look at him I see Harry Potter and I’m not even a fan of that franchise.

At this point in her career, Bullock could do this kind of thing in her sleep, and her charming turn in The Lost City explains why she has endured as a movie star for nearly 30 years. It helps that she has surprisingly good chemistry with Tatum, who understood the assignment here and made sure his abs were ready for their close-up. It’s also refreshing to see a studio movie pair an older actress (57) with a younger actor (41). More of that, please.

As well-cast as Bullock is in The Lost City, Tatum is the reason that the movie works as well as it does. One of the hardest things any actor can do is play “dumb,” and to his credit, Tatum is actually really good at it, having honed his chops in the Jump Street franchise. Don’t get me wrong, I’m not calling Tatum himself dumb, I’m saying he’s really good at playing dumb — right up there with Jim Carrey and Jeff Daniels, which is intended as high praise, indeed.

Ironically, the titular lost city is fairly irrelevant in a movie called The Lost City, which certainly won’t win any points for originality, nor will it really satisfy fans looking for an action fix. Pitt’s big rescue mission actually works well as an action sequence, but the rest of the film’s action is a little lacking. But is that really why you’re seeing this movie? For the action? No, the real action is between the stars, and as an adventure-romance movie, The Lost City works, for the most part. It’s a tough movie to get mad at.

The music is upbeat, the jokes work, and the first hour of this movie plays pretty well before it runs out of gas and starts to sputter, though it ultimately makes a strong recovery in the final reel. In the end, I think the good outweighs the bad here, and you’ll find enough laughs in The Lost City to justify the trip to the movies, especially if it’s date night. 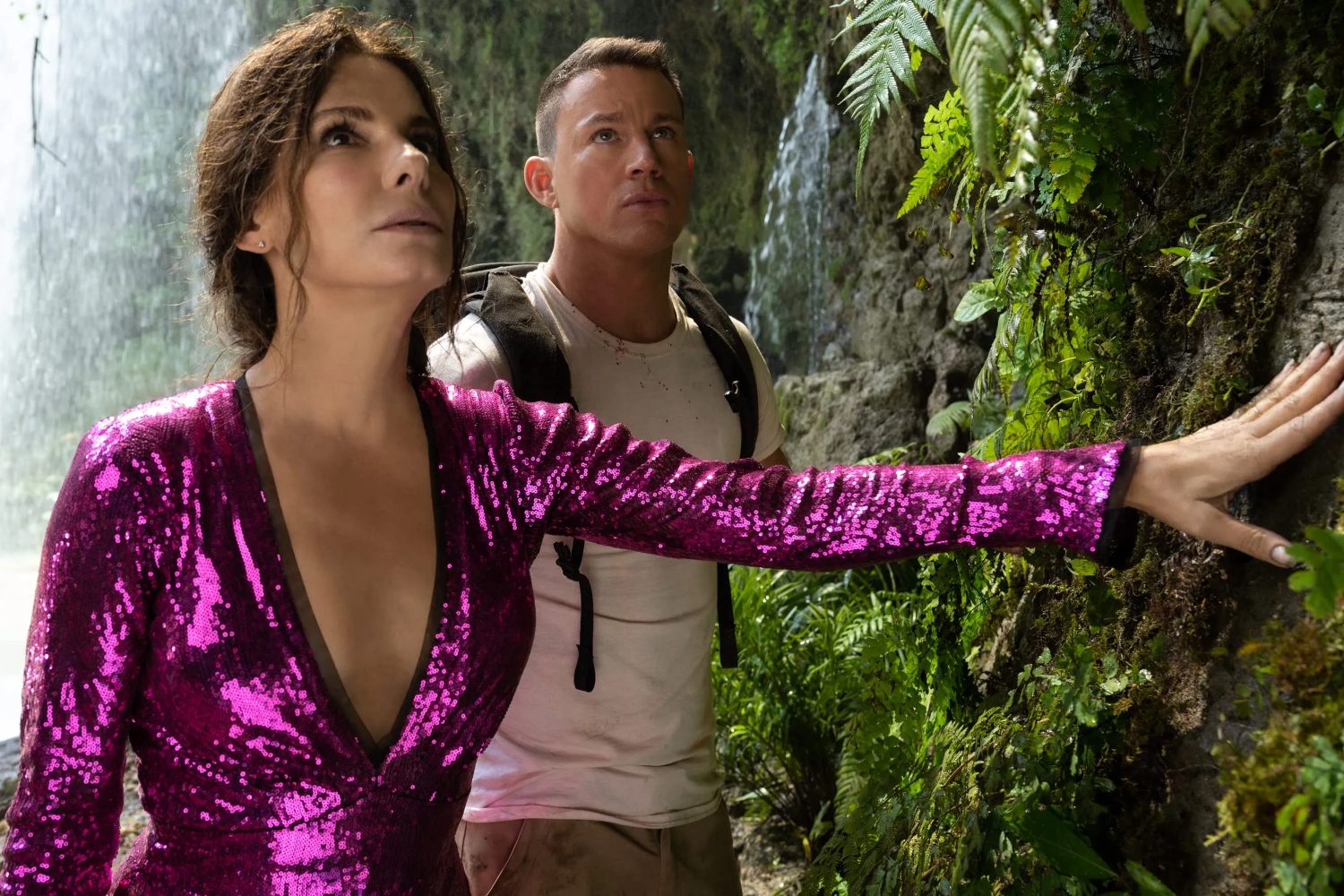