Home Uncategorized The Lo Down 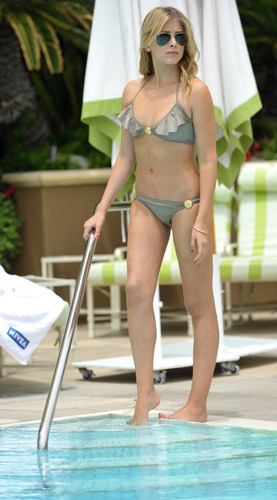 Coinciding with our Best Beaches issue, Lo Bosworth of The Hills participated in Nivea’s “Goodbye Cellulite, Hello Bikini Challenge”; that is to say she spent four weeks exercising, eating right, dressing well, and—of course—using Nivea products. Not such a bad deal, right? We recently sat down with her to discuss the challenge, her favorite beaches, and the The Hills series finale.

How did you get involved with the Goodbye Cellulite Challenge?
Nine out of ten women have cellulite and not everyone wants to talk about it. It was really just something I couldn’t turn down.

What exactly did the challenge entail?
The challenge is four weeks long—you use the product twice a day, at morning and at night. We are also doing an overhaul of people’s fitness regimes and how you eat. Style is the fourth element of it and we’re trying to tell women that it’s important to dress to your body type; you are going to look better if you are dressing for your body. And so for me, initially the hardest thing was getting my butt in the gym and eating healthy the first few days but kind of once you get over that first hill it really was smooth sailing for me from there on out.

I’ve noticed that many scenes on The Hills show you and your friends in bikinis. Does everyone keep a rigid fitness routine to keep in shape?
Working in this industry sort of requires it. Especially as a young woman, to get work you have to be in shape…it’s not something that I am fond of because I always sort of teeter on being thin and being fat [laughs], and so you know for me it’s hard work to maintain the body.

In honor of our beach issue, we were wondering—what are your favorite beaches?
I just love Malibu, but I go to the beach in Orange County more than in LA. I grew up in Laguna so that’s definitely home for me, I don’t think there are any better beaches in California. The beaches in Laguna are all coves, it’s not just a flat, long beach that goes on forever. When you go down to the beach there’s a sense of privacy, there are cliffs all around you. It’s just really picturesque down there.

What is your favorite thing to do there?
I like to play Bocce Ball. I know that a lot of people play Bocce on their grass, but we have turned it into a beach sport and I’ve played since I was little with all the neighborhood dads, it’s really fun.

You’ve been on the show for six seasons, how do you feel about it ending?
It’s bittersweet for me. It’s really been my life for the past few years and so in that regard I’m sad to leave the cast and the crew, but I am thrilled for my future projects. I’m transitioning into hosting right now and I have a TV show in development so fingers crossed that it gets picked up. I’m also launching my own digital media company, thelodown.com and my book, also entitled The Lo Down, comes out January 11th, 2011. It is a relationship guide for girls.