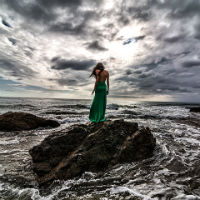 Growing up in Sarajevo during the Bosnian War, Harun Mehmedinović and his friends often made a game of daring each other to run across the wide empty boulevards known as “sniper alleys.” “I lost friends that way,” says Mehmedinović. “But as terrible and irrational as it sounds, it helped us stay sane. It was a way of rebelling against what was happening and trying to live in the moment.”

A desire to escape the horrors of routine has shaped the 31-year-old filmmaker and photographer’s Bloodhoney* project, a series of portraits featuring Mehmedinović’s friends posed against stunning vistas in the great American landscape. Mehmedinović, who divides his time between Los Angeles and Flagstaff, where he teaches photography and film at Northern Arizona University, decided to compile the images in a coffee table book. The first title, Séance, came out earlier this year after one of the most successful Kickstarter campaigns ever. The next book, Persona, will be out in August 2014.

“Whenever I visited my friends they complained about how their adult lives were chained to routine,” Mehmedinović says. “I suggested a photo shoot in which the setting would be determined by whoever I was shooting. They picked a location and I just went along with it.” Last April, Mehmedinović discussed his work in a TEDx talk, “Living in the Moment,” at Atlanta’s Emory University.

Bloodhoney*, the literal translation of the Turkish word “Balkan,” is about breaking free of self-imposed restrictions and being present in the now. The subjects sometimes wear beautiful gowns, in other cases they’re completely naked. The models themselves, however, aren’t the most transfixing element of Mehmedinović’s images; instead, the viewer’s gaze is drawn to the compositional harmony between subject and nature. In one shot, a woman in a white dress is enveloped by a blizzard, her ghostly figure the focal point in a wintry landscape. Another shows a woman standing on a rock in the surf, her stance recalling a figure in one of Romantic painter Caspar David Friedrich’s works, which often depict a lone man contemplating his smallness in the face of nature.

To call Mehmedinović a Romantic isn’t inaccurate; like the nineteenth-century artists and writers (Byron and Goethe among them) who fled civilization and embraced nature in search of a more authentic life, he has spent much of his time looking for new ways to connect with his surroundings. As a student at UCLA, he often took solitary road trips across the country, stopping only when the environment beckoned. “In Oklahoma I once saw a tornado up close. It was a surreal image. Looking in one direction the sky was clear and the sun was shining. When I turned my head, I saw a tornado come barreling across the flat land.” Mehmedinović stopped his car and got out his camera. “It was dangerous, but I just found it so appealing to entirely disconnect from being a modern human being.”

Abandoning the structures of everyday life has been transformative for Mehmedinović and his subjects. “We did a shoot in an old bunker in Virginia, close to Mount Vernon,” he says. “I asked the model if she had any dilemmas in her life, and she explained that she had married a man she didn’t love in deference to her parents. She said it was like being a prisoner in her own body.” The bunker, which had previously been occupied by squatters, was filthy and reeked of human waste. “When the model saw it she said, ‘I love it. I want to do the shoot naked,’” Mehmedinović says. “When I saw the photos afterwards, I understood. That space perfectly expressed how she felt about her marriage.”

Another shoot involved venturing out onto the ice of Boston’s frozen Charles River. “When we got back to shore I threw a rock and it crashed right through the ice,” Mehmedinović says. “People watching us probably thought we were insane, but it was quite beautiful, one of those rare moments where you’re able to completely take your life into your own hands.”

While Séance focused on the process itself—following the models around for hours at a time, allowing them space to find themselves in front of the camera—the second book, Persona, will center on how Mehmedinović’s subjects perform their own identities. “I would ask the models to come as they were but many showed up in a favorite dress or other items that functioned as a kind of mask,” he explains. “I found this layer interesting and decided to focus on it.”

The beauty of impulse is the organizing principle for Mehmedinović’s work. “People are miserable because they never get a chance to show who they are,” he says. “You have to be able to lose yourself sometimes and forget about time and all the other things that order your life. You have to embrace chaos.”