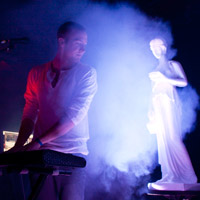 Harps, roman sculptures, and fog so thick it could have been tear gas: The baroque stylings of Active Child, who performed on Thursday at the Troubadour, left many in attendance bleary eyed. Led by frontman Pat Grossi, the band played tracks from their debut album, You Are All I See, which was released in August of 2011. At the tour’s final show, Grossi’s minimalist melodies and layered vocals echoed from the speakers as they would from a cathedral hall, making the dank club feel like hallowed ground. Like a space age pied piper, Grossi sat behind his harp, guiding listeners to a world where toga-clad Grecians jam with modern day musicians on MacBooks. Before the band’s final show of this headlining tour, L.A. native Grossi sat down to discuss the city and the part it has played in his personal history.

You left Los Angeles to attend college in Boulder, Colorado. What motivated you to return to Los Angeles?
I think it’s the same reason why a lot of us move here; it’s an incredibly beautiful area. The weather is perfect nearly everyday. I generally feel more connected to the West Coast than the East Coast, even though I grew up there. I toy with the idea of going back, maybe to New York, but at the same time L.A. feels 100 percent like home to me. I don’t think that will ever change.

How does this tour compare to your other tours?
Headlining a tour carries a little bit more pressure and more stress but also the rewards are that much bigger. My band and I were supporting for M83, White Rabbits, School of Seven Bells, James Blake, and Islands. But it’s really amazing to show up at a venue, and to know that everything that’s happening there has been put into place because you’re coming to play your music.

What have you learned about your fans that has surprised you?
I’m continually impressed by how connected people can be to the music. A lot of songs on the album are very personal; there are confessions in the composition, where I really delve into my own stories and a mix of my own emotions. Looking out on the audience, I typically see people there wrapped up with their boyfriend or girlfriend or closing their eyes and lost in their own world. I’ve seen a few people bawling their eyes out. Just these really intense moments with complete strangers can be very overwhelming. Once in Austin, I had this one guy come up to me, whose hand looked like it was crippled. He grabbed my hand with his, I looked to his friends for an explanation and they just said, “Oh his hand doesn’t work and he just wanted to touch your hand because he thought maybe that would help his.” I wanted to tell him, “I wish I could heal your hands, but my hands are just hands… there’s nothing else in there.”

Oh wow, what a trip. Maybe it’s the spiritual sound to your music that makes people think you posses these powers, but you were never classically trained.
I went to school in Boulder, Colorado, and no, I didn’t study music. I was a studio art major. I went there not really knowing what I wanted to study. Once, I went into the music school and approached someone about trying to get into the program. She kind of shot me down. It’s funny looking back at it now. She was like, “You’re not really trained in any instrument, maybe this isn’t for you,” and I was just like, “Oh okay…”

That must have been disheartening.
Yeah, my mom is a painter and studio artist, so I’ve grown up doing art and stuff like that. I’ve been musical my whole life, I just didn’t get any sort of formal schooling for it other than the choir.

How did you find your way back to music after college?
I was in school with a lot of other artists, accumulated a lot of really good friends who were creative, people who were making music. I continued to hang out with them after I graduated and moved to Denver.  We’d get together and play music. Doing that really reminded me how much I enjoyed singing and being creative – especially with music. I’ve done visual art for a long time and I never really got the same satisfaction from that as I have from music. One day I bought my own little recording set up and that first day I made a few little simple sounds and just got lost for hours.

What are some of your earlier concert memories? Were there any shows that gave you that intense feeling you describe seeing in other people?
I went to a lot of shows with my dad because he was in the music industry. I would tag along with him when he went to support artists on the label at their performances. I got to meet the artists, like on the South and Smoke tour, which was a big rap tour. Dr. Dre, Eminem and Snoop, I got to meet them all backstage.

What was it like meeting them?
Surreal. I remember walking into the green room at the Forum, which doesn’t exist anymore. I saw a picture with Eminem and me, I’m taller than him and I’m twelve years old. So yeah, it was pretty unreal seeing these people who are larger than life, in a lot of ways.

And then you’re larger than they are…
Yeah, it was pretty special. And then in High School I saw Dinosaur Jr., at the Fonda. I actually went to the show by myself, which I do a lot. I’ve seen more shows by myself than I have with other people. It was the first time I can remember feeling really lost at a show. I wasn’t aware of the people around me or what was going on, I just remember my ears really ringing for the first time. Probably not the best feeling but at that time it felt like it was a sign of a successful night out. They just rocked. I haven’t been to many shows like that and I haven’t been to many show like that since.

Photograph by Carl Pocket via buzzbands.la