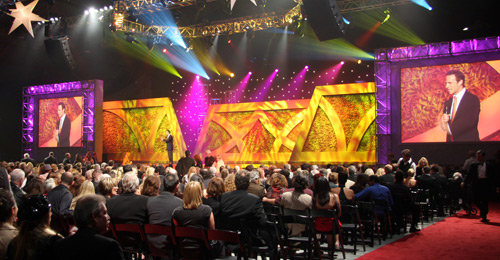 I’m talking about the 2009 World Magic Awards, of course, which took place last weekend at the Barker Hanger, located within the belly of the remote Santa Monica Airport. Produced by Gay Blackstone, one of the first women to be accepted into the Magic Circle in London and a past president of the Academy of Magical Arts, the event, which benefited Feed the Children, celebrated today’s best magicians, who took the stage to show off their titles and talents. Among the awards: Best Stage Magician, Best Escape Artist and Magician of the Year.

Michael Finney, named Comedy Magician of the Year, donned a loud, scarlet ensemble and playfully conned an audience member out of a hundred dollar bill while poking fun of his diminishing hairline. Gary & Paul, the world’s only identical twin illusionists who just so happen to resemble Sacha Baron Cohen clones with tangerine-tinted Mohawks, sawed a nervous audience member in half while insisting that the coffin she lay in was “the best seat in the house.” Scottish duo Barry & Stuart utilized sexual innuendos, solved a rubik’s cube mid-air, and then (you’ll just have to imagine it) crawled through each other’s stomachs. They were a breath of fresh air, melding the comical with the slightly creepy.

Milt Larsen, creator of the Magic Castle in Hollywood, was awarded the lifetime achievement award—and even Lance Burton made an appearance, live via teleprompter from Las Vegas where he was performing his act at the Monte Carlo.

Aside from all that entertainment, it was gratifying to watch three women from the male-saturated industry be honored. Katalin, a magician originally from Budapest, Helena Gorbachevski of Ukraine, and Morgan were recognized as leading illusionists. Morgan freed herself from descending razor sharp steel spikes while handcuffed in place within sixty seconds (which left just enough time to gracefully accept her award for Best Female Escape Artist).

It’s hard to believe that such an extraordinary event takes place each year in the recesses of Santa Monica, disappearing before many of us would even notice. That’s magic.