Home Uncategorized The Icon Herself: Angela Davis at the Pan African Film Festival 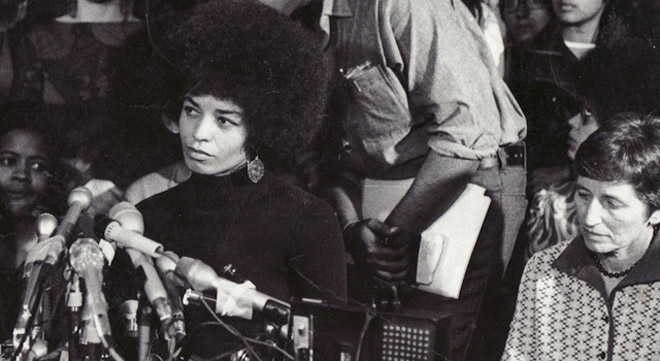 Capping off the 21st Pan African Film Festival with a resonating bang, political activist and icon Angela Davis will be the special guest during Sunday’s Los Angeles premiere of Free Angela and All Political Prisoners, the documentary based on her life.

Davis’ appearance came as a happy surprise even to the woman responsible for revisiting her past. “We’re totally thrilled,” filmmaker Shola Lynch says. “We got a call like, Angela’s gonna show up! Some of her relatives are gonna be there and a couple people who were in the film, and Jada” — that’s Jada Pinkett-Smith, who joins husband Will and hip-hop god Jay-Z as executive producer — “looks like she’s coming, and Angela decided she wants to be there too. It’s pretty exciting.”

A long time coming due to the difficulty of raising funds for the movie, Free Angela marks the 40th anniversary of Davis’ acquittal on charges of murder, kidnapping, and conspiracy. The third woman to appear on the FBI’s Ten Most Wanted Fugitive List, Davis captivated the nation as authorities searched for her in 1970. She had been implicated in a Marin County, Calif., courtroom attack that August after police discovered she had purchased the firearms used by 17-year-old Jonathan Jackson during a clash that resulted in the deaths of six people. Nearly two months after a judge issued the warrant for her arrest, FBI agents found Davis in New York City, prompting then-President Richard Nixon to congratulate them for capturing the “dangerous terrorist.”

The masses didn’t agree with that characterization. Davis’ arrest and plea of innocence five months later prompted a liberation movement. She was released from jail after 18 months, having been acquitted on all charges by an all-white jury.

“I didn’t know that much about the story,” Lynch says. “I knew who Angela Davis was, I knew she was this icon, but I couldn’t tell you that much about the details. So the overarching question I was asking was, who is the woman behind the icon? And also, how did this 26-year-old philosophy graduate student become an international political icon? How does that happen?”

Lynch’s film uses archival footage and interviews with the icon herself to explore Davis’ personal life and early career as a UCLA professor when then-Gov. Ronald Reagan labeled her teaching a “provocation” due to her involvement with the Communist Party.

Sunday won’t be Davis’ first look at the film, a potentially awkward experience for a public figure who Lynch says is surprisingly shy. During an early pre-screening, “Her foot wagged quite a bit, she sat forward several times, she gasped a couple of times, and I like to believe she did get teary twice.” The documentarian laughingly adds, “This is my interpretation while I’m trying not to stare at her as she’s watching.”

Free Angela is the second feature-length film for Lynch, who previously worked as an associate producer for Ken Burns and Florentine Films. Her finished product prompted praise from Pinkett Smith: “[She’s] done an incredible job in revealing a piece of American history we thought we all knew.”

Lynch says the film’s exploration of a seemingly well-known trial is a baby step in correcting a glaring misperception. “The image that comes to mind is the FBI Most Wanted poster. There were so many months of that kind of press, and then there’s very little after the trial was done. So that’s not what people remember,” she says. “It skews your point of view.”