Home Art The I Have A Name Project Comes to FachaPatoto Gallery for a... 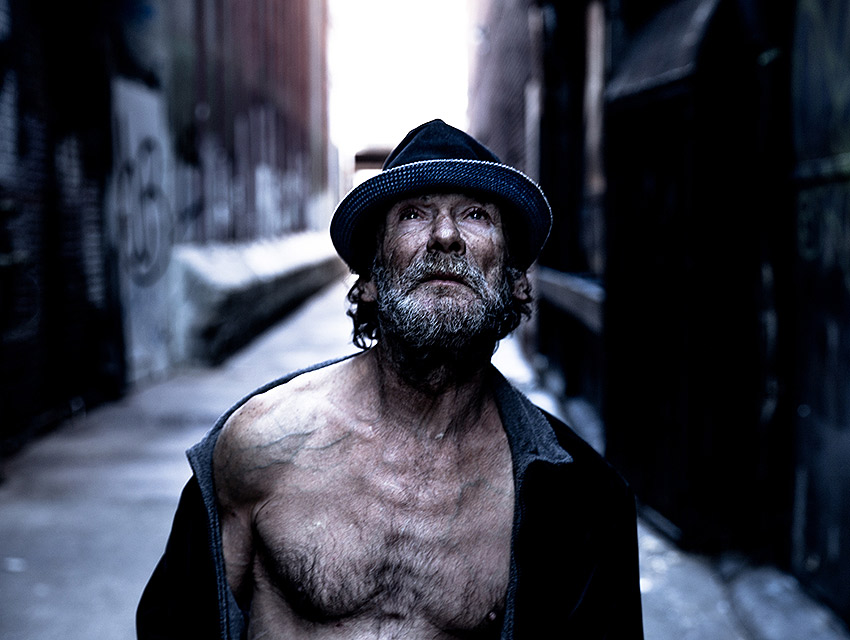 Photograph by B4 Flight/Craig Schultz

“I didn’t really want to go on what I felt was a safari for the homeless,” Jon Linton tells me. “But I thought if I put a camera in the car and saw somebody, I’d share a conversation with them and maybe a photograph would take place.” In 2007, Linton, a Phoenix-based photographer, had the idea to document homelessness in his city to create awareness and incite change. But he couldn’t have known what would happen when he set that idea in motion. “For as long as I draw breath I’ll remember Chuck Ridgeway,” Linton says. “I told him I was working on a project for people in need. I said, ‘My name is Jon, what’s your name?’ And he said, ‘You have no idea how long it has been since someone has cared to ask me who I am.’” And so the I Have a Name Project was born.

In last eight years, Linton has shown his own photography twice in Phoenix and twice in Tucson. On Friday, June 26, the project will be on display from 6 p.m. to 10p.m. at Boyle Heights’s FachaPatoto Studio & Gallery for one night only—its first exhibition outside of Arizona—and will feature work from anonymous graffiti artist Skid Robot and L.A.-based photographer B4 Flight, also known as Craig Schultz. “I felt like it was important to have something anchored in L.A.—to have imagery from L.A. and to integrate what is going on here,” Linton says. Skid Robot, who draws vividly colored bedroom scenes and dream bubbles on the streets of Skid Row, will present a special installation while B4 Flight, I Have A Name’s official Los Angeles photographer, will be selling aluminum prints of Skid Row’s homeless residents (see examples of both below). The evening’s proceeds will benefit the Guadalupe Homeless Project in Boyle Heights.

The I Have A Name Project has harnessed the power of social media, amassing more than 40,000 followers across Twitter, Facebook, and Instagram (Entourage’s Adrian Grenier famously gave the organization a shout out on his own IG account). Nevertheless, Linton says he’s prepared to put his photography to bed and focus on more tangible change. “My thoughts in some ways that this will be the last exhibition for the work,” he says. “I’d like to dedicate more time to outreach. This project is about awareness—about reminding people of things we shouldn’t have to be reminded of. I’m just a guy who stopped and turned the noise down.”

#injustice anywhere is a #threat to #justice everywhere. – #martinlutherking We stand in solidarity with those in #Baltimore and across the #nation who have taken to the #streets demanding justice for the murder of #freddiegray. #allmenarecreatedequal #libertyandjusticeforall #endpolicebrutality #alllivesmatter

@thomasrebman has been living on the #streets of #skidrow for a few days now and it has been quite the #experience for him. He told me its unlike anywhere else in the country that he has been #homeless in while working on his project. Im glad to have the opportunity to spend time with him and share our crazy stories, beliefs, and struggles. We roamed the streets all night, eventually finding our way to this location where i #painted him a place to rest for the evening…#staytuned for more! #skidrobot x #homelessteacher #helpthepoor#feedtheneedy #savehumanity #compassionisthesolution

“It has become clear to me, that in our troubled #world so full of contradictions, it cannot be #wisdom to assert the unique truth of one #faith over another. The #wise person makes #justice his guide and learns from all. Perhaps in this way, the door may be opened again whose key has been lost.” – Akbar the Great In the wake of the #charliehebdo event, we must not let the tragedy be used as a mechanism to generate more fear, hatred and violence. Extremists exist within all sects of society and all religions, not only Islam. It would serve us all tremendously to stop judging others for their beliefs. Learn to #respect and #love each other and be tolerant of the differences between us. This is truly the #key to opening the door to a world of #reason once again. #peace and #blessings to all✌ #goldenage #worldofreason #savehumanity #skidrobot

A #king without a #castle