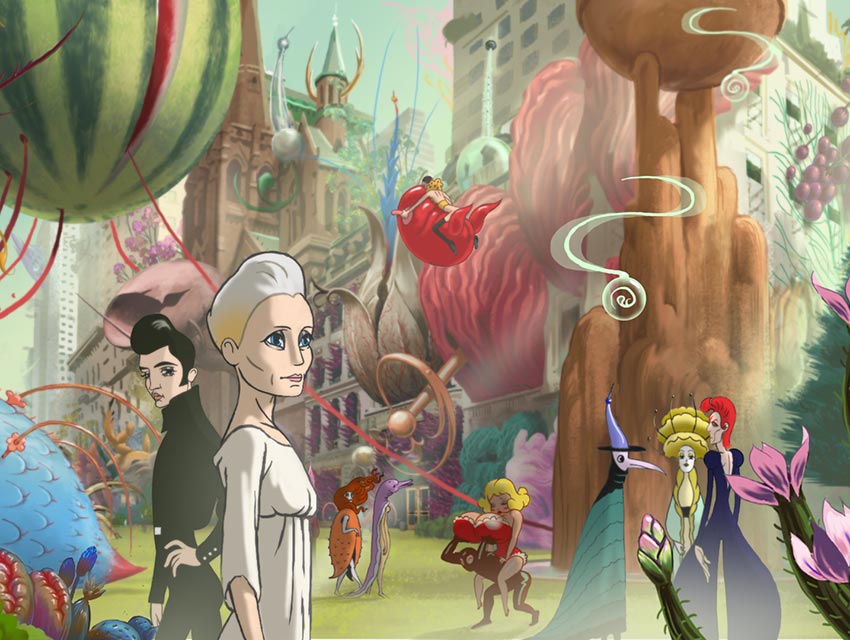 From start to finish Sin City: A Dame to Kill For was, just like its predecessor Sin City, filmed against a greenscreen. In some cases, actors never shared a soundstage with each other. Other movies feature CGI characters performing alongside humans. Andy Serkis found fame playing Gollum in The Lord of the Rings and more recently as leader of the primates in Planet of the Apes. When Paul Walker died while filming Fast & Furious 7, producers decided that his part in the film would be finished by using body doubles and digitally recreating his face. We’ll see how successful the effort is when the movie comes out in 2015, but the trend has already caused concern. What happens when actors are no longer needed for, well, acting?

One movie is ahead of the curve. The Congress, which has been available via video on demand for about a month, rolls into theaters this weekend. It’s the latest from director Ari Folman, who made waves in 2008 with his animated documentary Waltz With Bashir. Unlike that film, The Congress incorporates real-life footage and animation; it’s in the mixture of the two that it finds a thesis on the state of modern filmmaking.

The Congress stars Robin Wright as a fictionalized version of herself, sharing a similar career history (The Princess Bride is mentioned) but facing financial and familial troubles that are (presumably) different from those of the real Wright. Hard up for cash, Wright accepts an unusual proposal from Jeff Green (Danny Huston), the head of Miramount Studios: She will allow herself to be digitally scanned and give Miramount the license to use her likeness in perpetuity, in any way the studio pleases. Her digital persona will “act” in whatever Miramount wants to use it in, while she will be barred from acting in anything again. When the movie screened at AFI Fest last year, it seemed almost too bizarre to contemplate; in light of the Paul Walker situation, it seems eerily plausible. In TheCongress, Wright’s body and face are scanned with a hemispheric array of lit diodes, a technology based on real (albeit less sophisticated) techniques currently in use.

Studios aren’t able to perfectly recreate people on screen… not yet, at least. But that hasn’t stopped them from trying. In this realm (as in many others) commercials have been in the vanguard. In 1997 Fred Astaire danced with a Dirt Devil and John Wayne hocked Coors (Mental Floss has a good rundown on dead celebs who were brought back to sell stuff), ads that were achieved using old footage and sound clips along with editing and compositing. More recently, Orville Redenbacher began promoting his popcorn from beyond the grave and Audrey Hepburn fell in love with a Galaxy chocolate bar to the strains of “Moon River.” So far, these avatars lie in the realm of the Uncanny Valley, their effectiveness impeded by their not-quite-humanness. But what will happen when computers can perfectly recreate a person to the point where an audience can’t tell that they’re not real?

In The Congress, after Wright signs away her face, the story jumps ahead twenty years to explore the consequences of her decision. Miramount has developed its technology to the point where it can now alter people’s perceptions of reality. Once Wright enters the Futurological Congress that is the namesake of the film, the action switches from reality to animation; the studios have mastered not just fiction but the way people look at their everyday life. They’ve molded themselves into cartoon caricatures of old Hollywood archetypes, as though they’re hunks and starlets drawn in the style of Max Fleischer. Folman connects the hold that movies have on our imaginations to the way the media influences us.

Folman deliberately plays on real life parallels. With a name drawn from Miramax and Paramount, “Miramount” is a stand-in for the entertainment industrial complex. The studio’s digital avatar initiative recalls the golden age of Hollywood’s studio system when entities like Paramount controlled their stars’ lives. in Jeff Green, there are shades of the ruthless techniques commonly attributed to Miramax founder Harvey Weinstein. The film also spoofs other entertainment idiosyncrasies as well; Tom Cruise (not voiced by the man himself) makes a nameless cameo, and a charismatic go-getter named Reeve Bobs puts on an enthusiastic presentation for Miramount’s tech. Eventually, Wright gives voice to one of the movie’s main ideas, that people are not products.

As the day draws closer when the technology in The Congress becomes a reality, the legal ramifications are myriad. Here in California, the Celebrity Rights Act (passed partly because of the Fred Astaire Dirt Devil commercial) allows celebrities’ descendants to retain the rights to their images after their deaths. But laws in this area differ across both America and around the world. Going forward, we’ll see how companies and artists wade through this mire. In the world of The Congress, the result is a dystopia where people are kept pacified by their illusions. Some would say that this is the function Hollywood already fills, but hopefully that’s not where we’re headed.

Some Things to Know About Clueless Actress Stacey Dash, Who Is Seriously Running for Congress

Secrecy, Subversion, and Sweet Tea: How to Throw a House of Cards Premiere Party