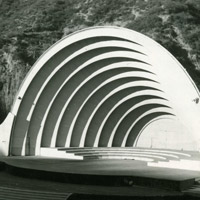 Beloved local tradition, tourist attraction, and world-famous architectural icon rolled into one, the Hollywood Bowl is to summer in L.A. what live music is to the outdoors: a perfect complement. The 100-year-old venue kicks off its 2012 season this Friday. Picnic basket in hand, we count off the Bowl’s most interesting stats.

Between 2,000 and 3,000 G Clef-shaped Hollywood Bowl pencils are sold on-site per season.

80-year-old John Williams has conducted at the Bowl 80 times since 1978. That number will increase to 82 after this year.

More than 1,000 light sabers are sold at his annual concert.

12 shows will end with fireworks this season.

The Bowl’s most frequent conductor, John Mauceri, has led over 300 concerts.

There are 2,800 parking spaces at the venue.

More than 2,600 pounds of popcorn are produced per season.

Max Foster, known as “Uncle Max,” worked at the Hollywood Bowl and LA Phil for 63 years. He started as an usher in 1936, at age 17, and then continued at the box office until his retirement in 1999.

242,988 people traveled to and from the Hollywood Bowl last summer via Park & Ride.

The Hollywood Bowl sits on 85 acres of land.

The Bowl has appeared in more than 25 feature films, at least 3 animated film and 15 live concert films, and more than 30 TV shows and documentaries.

1 person lined up for single-ticket sales this year at 3 p.m.—the day before.

Usher Tim Creadon is the current staff member who has been with the Bowl the longest, 45 seasons counting this year.

Gustavo Dudamel has performed at the Bowl 10 times.

The theater’s last row is 450 feet from the Bowl’s down-stage edge.

Each show requires an average of 8 hours of clean up.

2 or 3 technicians staff the soundboard at each concert.