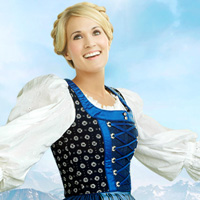 From plucky reality show contestant to bona fide country music star, Carrie Underwood has played many roles throughout her career. But does she have the chops to play an Austrian nun-turned-governess in a new version of The Sound of Music? To add a level of difficulty, when it airs on NBC on December 5th, the production will go out live.

Though it’s billed as a faithful adaptation of the classic Rodgers & Hammerstein musical, this Sound of Music is making some fans of the 1965 movie feel jittery. Can Underwood drop her Oklahoma twang? And even if she can, who can match the purity of Julie Andrews’ crystalline tones?

This weekend, NBC released its “first look” at the show, a 20-second video clip that features Underwood in braids and a milkmaid but shows almost nothing else. Here are some other things we know about NBC’s new take on the old classic.

1. Carrie Underwood can sing
What a relief! Here she is singing “The Sound of Music” for CBS’ Movies Rock in 2007. True, she’s singing in a lower key than Julie Andrews but she can hit the notes. The question is, will she resort to the modern trend of stretching even the simplest notes into multi-octave trills? At least that Southern twang will come in handy when yodeling through “The Lonely Goatherd.”

2. Stephen Moyer will brood
Vampire Bill is about to get all “soft and white, clean and bright” as Captain Von Trapp. Fortunately, the role doesn’t require a huge vocal range, just a dash of charisma and an awful lot of stoicism. Mr. Anna Paquin should do fine.

3. The supporting cast can win Tonys
Audra McDonald, goddess of the high F, will encourage us to “Climb Every Mountain” as Mother Abbess. The adorable Christian Borle, who stole our hearts as Emmett in Legally Blonde the Musical, will play Uncle Max. And the hilarious Laura Benanty will play Baroness Schraeder. Because NBC claims to be adapting the original stage version, Max and the Baroness should get to sing two comedic numbers that were cut from the film version. Definitely something to look forward to!

4. All the Von Trapps are accounted for
The seven lucky youngsters who were cast as the Von Trapp children sang “So Long, Farewell” to their competition then celebrated winning their roles by gathering for a photo with their future governess. We can’t wait to see this bunch in matching dirndls and lederhosen.

5. Thanksgiving will provide all the answers
The cast will be performing live at the Macy’s Thanksgiving Day Parade. Hopefully, this will give us more clues about how NBC adapted the musical: Will Carrie dance through the hills? Is the show set in World War II Switzerland or present-day New York? And how do you solve a problem like Maria?